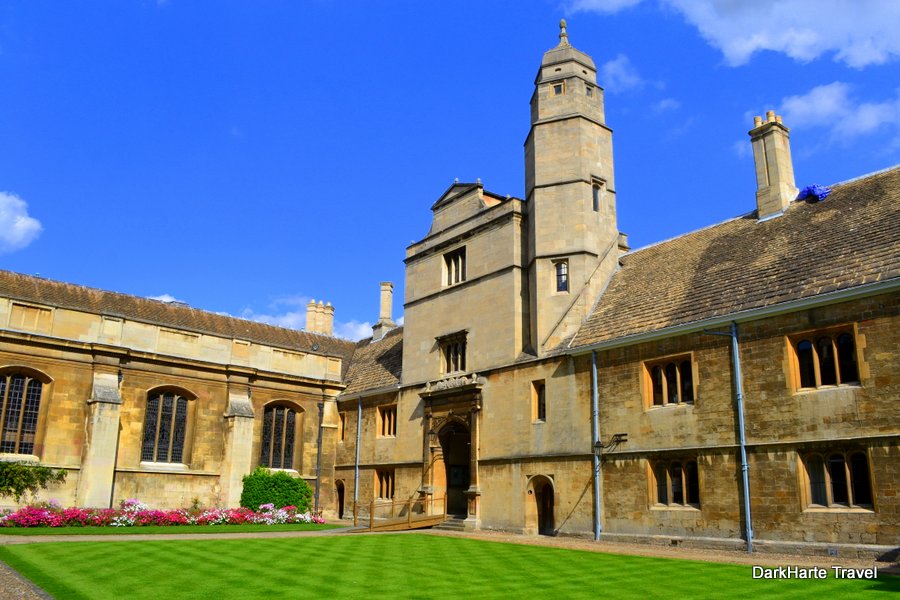 Gonville & Caius College is one of the oldest Cambridge colleges, founded in 1348.

I had been wanting to see the inside of the college for a while, having walked past the outside for years. So I went for a wander around one sunny lunchtime. There was a lot of building work going on over the front entrance to the college, but the porters’ lodge was open and friendly, and I could walk right in.

Gonville and Caius College sits in a square surrounded by Trinity Lane, Trinity Street and Senate House Passage, in the heart of the ancient university quarter.

Summer foliage at Gonville and Caius.

These open doorways intrigued me, as they are split over two levels.

This old, impressive vine shelters a doorway into a turret.

The centre point of Cambridge was historically Great St Mary’s Church, and this is still a key site today, as students of the University are meant to live within 10 miles of Great St Mary’s. Gonville & Caius (pronounced Gonville & ‘keys’) lies very close to this University church, and is also adjacent to the old church of Michaelhouse.

The ramps around college are the first clue that a particular famous cosmologist works here.

The central location of Gonville & Caius is also testified to by its neighbouring Senate House, where student graduations take place.

The medieval building, wall and sundial of Gonville and Caius, with the white Georgian facade of Senate House behind.

Gonville & Caius is a small and compact, pretty college, with an ancient history.  It is also a highly successful college. It is currently the strongest college at rowing, and has been the home of Professor Stephen Hawking for most of his Cambridge career.

The sundial, from inside the college. This sundial fits into the ancient boundary wall of Gonville and Caius College. The University’s Senate House sits behind the wall.

The medieval boundary wall of Gonville and Caius, with Senate House behind.

Flower bed beside the college chapel.

An event was taking place in the third courtyard (Gonville Court) when I visited.

Find out more about Gonville and Caius: