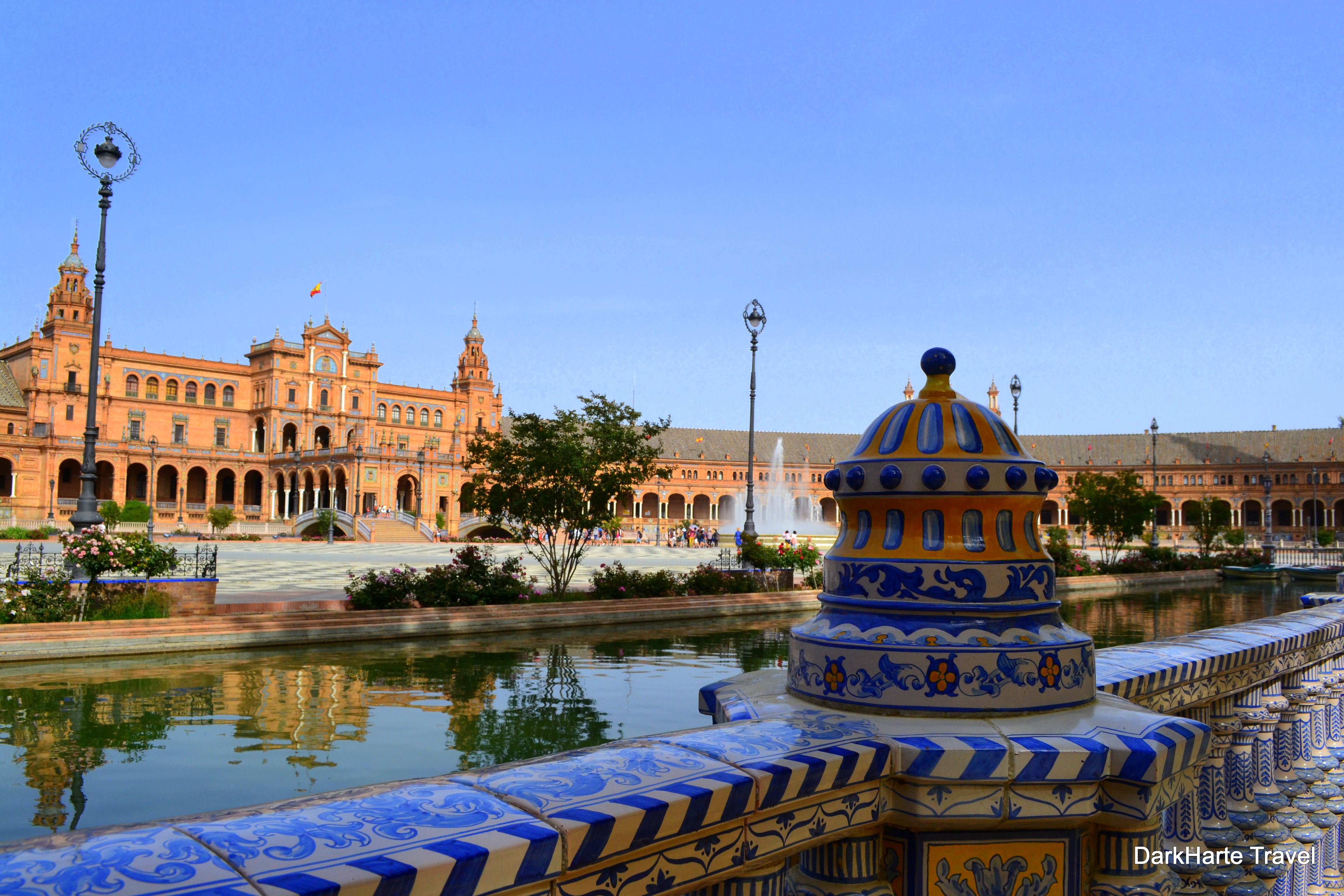 I loved exploring the Plaza de España in Seville. It was my favourite place in the city when I visited in May.

Surrounded by lakes, bridges and fountains, the Plaza de España is a sweeping, palatial building full of alcoves that represent each of Spain’s provinces.

The Plaza de España has copious amounts of ceramic tile and enclosed paving, which are baked scorching hot… the whole plaza feels like a celebration of the sun.

Light streams through the water everywhere and reflects off hot surfaces.

The alcoves and tiles are bright colours. Being at the Plaza de España is an intense experience of being surrounded by colour and light.

The alcoves for Albacete (above) and Cadiz (below). I was particularly interested to see Cadiz’s alcove because I would visit that city later in my trip.

All of the many alcoves have a remarkable level of detail and beautiful pictures. Alcoves span around the whole length of the Plaza de España.

Built for Seville’s hosting of the World’s Fair in 1929, the Plaza de España celebrates both Moorish and Renaissance styles of architecture. The region of Andalucia in southern Spain has had a strong Islamic influence due to centuries of rule by Arabic leaders from north Africa. You can see this architectural impact in the arches, pillars and courtyards of Andalucian cities like Seville and Córdoba.

This horse and carriage had the perfect backdrop as they trotted past the central part of the Plaza de España.

The Plaza de España has often been used as a film location. The Star Wars films The Phantom Menace (1999) and Attack of the Clones (2002) were both filmed here, where the Plaza de España represented the city of Theed on the planet Naboo.

Lawrence of Arabia (1962) and, most recently, The Dictator (2012) were also filmed on location at the Plaza de España in Seville.

Ceramic tiles feature everywhere on the Plaza de España, from benches and bridges, to balconies and railings. It is a really colourful and unique aspect of the park.

Close ups of some of my favourite alcoves: Almeria (above), a coastal city whose representative picture is of a medieval castle, and Alicante (below) with a rural scene sweeping down to the sea.

Bergos has a darker, more elaborate image. The Plaza de España’s alcoves of Spanish provinces are fascinating places to explore.

The lakes are used for boating, and rowing boats can be hired. Ducks and fish can also be seen in the water.

It was late afternoon when we visited, around 6pm, but the plaza was burning hot. The paving all around the Plaza de España and the ceramic tiles seemed to create a dazzling, baking heat, which was heightened by the reflection of the sun’s rays off the surrounding water.

I love the heat, but not everyone feels the same. For its magnificent size, the plaza was almost deserted. A handful of people hung around the alcoves seeking respite in the shade.

In the centre of the Plaza de España lies a great fountain.

Standing in the spray of the fountain was an enjoyable way to cool off. I got thoroughly wet from the water jets, but my clothes dried again soon afterwards.

This newly married couple were having their wedding photographs taken around the Plaza de España.

You can go up to the first floor level of the pavilion building, and look out from the balconies.