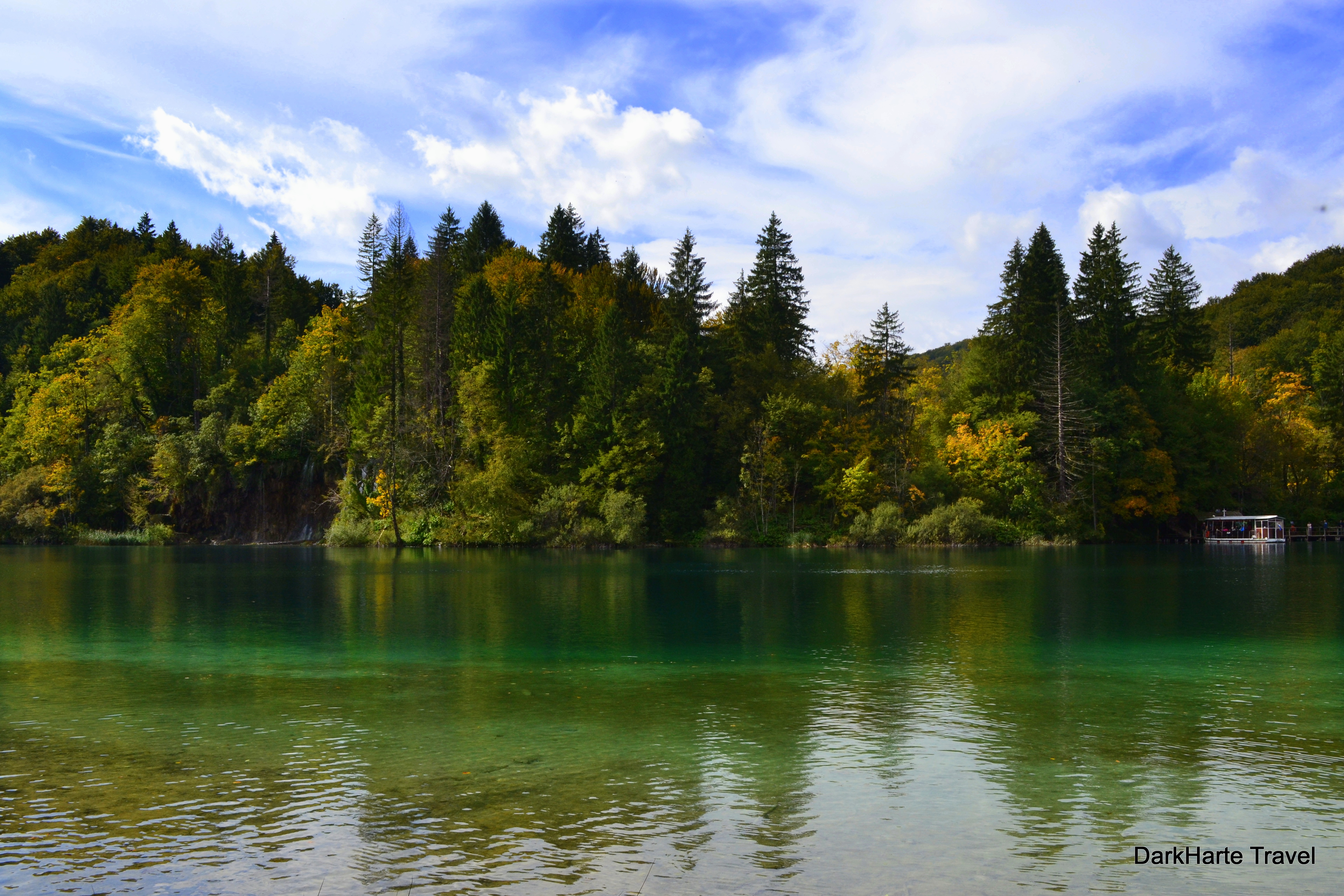 In early October I visited Croatia. I’ve wanted to go to Croatia for several years, so was excited to land in Zadar, a coastal city with classical ruins and buildings made of white stone.

After exploring Zadar we travelled inland by bus, across beautiful misty mountains and moor. The climate and scenery changed, as we moved from Mediterranean to Alpine styles of settlement.

We stayed in the village of Jezerce and visited Plitvice Lakes National Park. It is an incredible place, the kind of place where you are stunned by the first scenery immediately inside the park entrance, only to keep discovering more sights that take your breath away the further you explore the area.

The Plitvice Lakes are a series of lakes and pools that have formed at the convergence of several rivers. The rivers cut down through a forested gorge in a sequence of cataracts and waterfalls, from the upper lakes down to the lower lakes and the largest waterfall, known as ‘Veliki Slap‘ or ‘Big Waterfall’.

The pools and waterfalls have been formed by the geology of the area. Tuff (or tufa in Croatian) is a relatively soft, pumice-like stone, which has formed in ridges while the limestone underneath has been eroded by water.

These ridges create natural dams along the course of the river, causing pools to form and waterfalls to flow over the edges of the dams. The river travels along the gorge in a cascade of lakes and waterfalls.

Plitvice Lakes National Park lies within the mountainous karst region of inland Croatia. Some of the rivers contributing to the Plitvice Lakes river system are subterranean karst rivers.

The sequence of lakes are all interconnected and flow in the same direction.

The national park has beautiful scenery and is a wonderful natural space. These amazing tree roots show how the limestone of the park has been eroded by water.

It was a great time of year to visit Plitvice Lakes National Park as the leaves were changing colour for autumn, creating picturesque contrasts between red and yellow leaves and blue-green water. I’m sure the Plitvice Lakes are amazing to explore in any season though.

Rustic boardwalks made of logs snake through the park. The boardwalks are amazing: some are dramatically placed directly over waterfalls, while others wind alongside or across shimmering blue pools.

Parts of the walk around the Upper Lakes reminded me of the dead marshes in Lord of the Rings. Here the boardwalk was on the level of the water, and the pools themselves were transparent and alluring. Their clarity was hypnotic, drawing the eye down to the bottom of the pool.

The ‘dead marshes’ lie in front of this amazing waterfall. I could feel the spray in my face from the force of the water gushing down, even though the falls were quite far away from where I stood.

The rays of sunlight here have a nice effect coming through the falling streams of water. The colours of the trees’ autumn foliage around the waterfall contributed to the scenery.

This tranquil pool led to a brilliant cascade waterfall. Amazingly clear green water contrasted with the yellow autumn leaves and the blue sky.

This was one of the most beautiful and impressive pools, surrounded by a cliff of cascading waterfalls.

The boardwalk wound up a path into the forest.

The extensive root systems of surrounding trees are exposed on the edge of this bank, above another clear green shallow pool.

This view was outstanding: orange and yellow leaves, with fallen brown leaves among the tree roots, and blue water reflecting a blue sky.

A waterfall crashes past a steep woodland path, where a single wooden rail guards against the drop below.

The path continues through a grove of silver birches.

I love how this staircase in the boardwalk follows the ridges of the flowing stream.

Another beautiful and secluded pool in the river system. The greenness of the water was surreal – just amazing.

This view was looking out at the opposite side of the valley. It was a wonderful sight with the autumn foliage and clouded blue sky reflected in the lake.

I returned to this secluded pool, where the sunlight sparkling on the water created an enchanting green surface.

The water was so perfectly clear that you could see down to the sticks and branches lying on the bottom of the pool.

We continued through the forest.

The path to the Upper Lakes returns to the large middle lake that lies between the upper and lower lake systems.

A jetty stands on the edge of the bank, and ferries belonging to the national park dock here and transport passengers across the lake.

The water is very clear, and there are ducks and many large fish. As the ferry moves away from the jetty, waterfalls around the side of the bank come into view.

One thought on “Plitvice Lakes: the Upper Lakes”