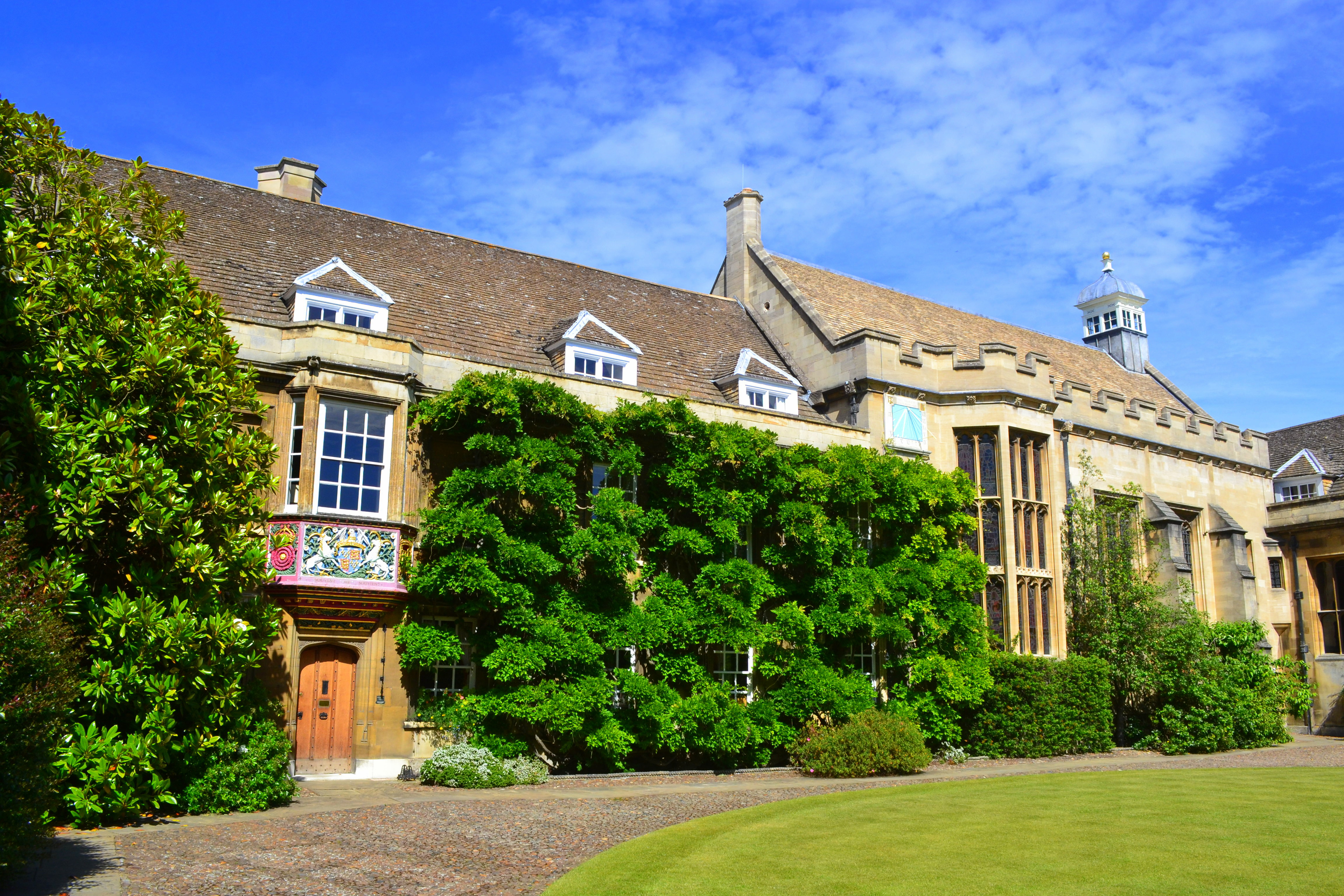 The Alma mater of Charles Darwin and John Milton, Christ’s is an established older college in Cambridge. Christ’s was founded in 1505, by a woman, Lady Margaret Beaufort, which makes it something rather special.

Christ’s was established from an older college, Godshouse, which has since disappeared, and the college was moved to where it stands today in east central Cambridge near the main shopping precinct. The large public park of Christ’s Pieces lies behind it.

The college has a large Fellows’ Garden, which is open to the public (for free) Monday to Friday during the day.

The First Court has a famous circular lawn, and the Master’s Lodge is covered with wisteria.

The college is one of only five Oxbridge colleges with a swimming pool.

The original parts of the college lie around First Court, and this is where the oldest buildings are clustered: dining hall, chapel, Master’s Lodge and Library. The newer buildings and courtyards lie in the grounds behind them.

The Fellows’ Garden has a large lawn with benches and big trees, and is circuited around the edges by a shaded, tree-lined walk.

On the sunny central lawn there are colourful beds of beautiful flowers.

Notice the details adorning this doorway in First Court. There are two rams, a portcullis and the red rose representing the House of Lancaster. This was later merged with the white rose of York to form the Tudor rose. These emblems attest to the College’s founder Lady Margaret Beaufort, who was the mother of Henry VII, the first Tudor king. The uncrowned portcullis was used as a family motif by the Beauforts, and later a ‘crowned’ version became the symbol for royalty, and today it is the symbol used for the Westminster Parliament.

Through this passageway the path leads out to Second Court, with the Fellows’ Building ahead.

Third Court lies behind the Master’s Garden and is enclosed on three sides by buildings. There used to be a lawn with a large tree, but the courtyard has been landscaped anew with gravel paths and shrubs.

Naturalist Charles Darwin lived and studied at Christ’s from 1828 to 1831, taking an ordinary BA degree in theology as he was unqualified to take Tripos examinations. Despite studying theology (only subjects like theology, medicine and law were taught at university at that time) Darwin met and befriended several naturalists at Christ’s.

After leaving Cambridge Darwin went to Tenerife to continue his natural history research in a hotter climate. Later that year, in December 1831, Darwin set off on his famous voyage on HMS Beagle, which was to circumnavigate the globe and give Darwin the inspiration for his revolutionary theory of evolution. His work on evolution changed the world and significantly shaped our modern understanding of ecology and biology. Still an important figure today, Charles Darwin has been on the back of the British £10 note since 2000.

Darwin has a dedicated garden in the college grounds, reached by a path off Third Court:

The poet John Milton, author of the epic Paradise Lost, was at Christ’s from 1625 to 1632, well before Darwin. Milton took both BA and MA degrees, and wrote some of his well-known short poetry while at Cambridge. After leaving Cambridge he returned home to Hammersmith (then a village near London) and undertook further self-directed study for six years. He is considered the most educated of English poets, and knew many languages including Latin, Greek, Hebrew, French, Spanish, Italian, Old English and Dutch.

An educated and well-travelled public figure, Milton’s political and religious views were influential. A campaigner for the legalisation of divorce, and a republican, he was regarded both as a dangerous radical and an early liberal. His epic Paradise Lost tells the story of God and Satan, and was followed by Paradise Regained. Milton lived through a turbulent period in English history, including the Civil War. After a period of republicanism, the British royal family were reinstated in 1660, and the views of public figures like Milton declined in popularity. At his death in 1674 Milton was impoverished and out of favour, but he was known across Europe and had no regrets about his political affinities.

The earlier college Godshouse, the precursor of Christ’s, was built on land now owned by King’s College Chapel. As Christ’s College, the community was re-founded on its present site in St Andrew’s Street, which is now the main street entering Cambridge from the south. In medieval Cambridge the main high street would have been Trinity Street, leading on to Trumpington Street, and many of the older colleges lie along this route. Christ’s site lies further off, in the east of the historic city centre. Nowadays however Christ’s is likely to be one of the colleges you are most certain to pass if you come to Cambridge for shopping, as St Andrew’s Street is now the main thoroughfare.

In medieval Cambridge the city was marked by gates at its entrances. The gatehouse of Christ’s lies opposite one of these medieval gate sites. Interestingly, a gate is still there today, and now marks off the entrance to a pedestrian zone.

Views of Second Court in spring and summer.

The front entrance door is one of my favourite bits of this college. I love this massive old door hook on the back.