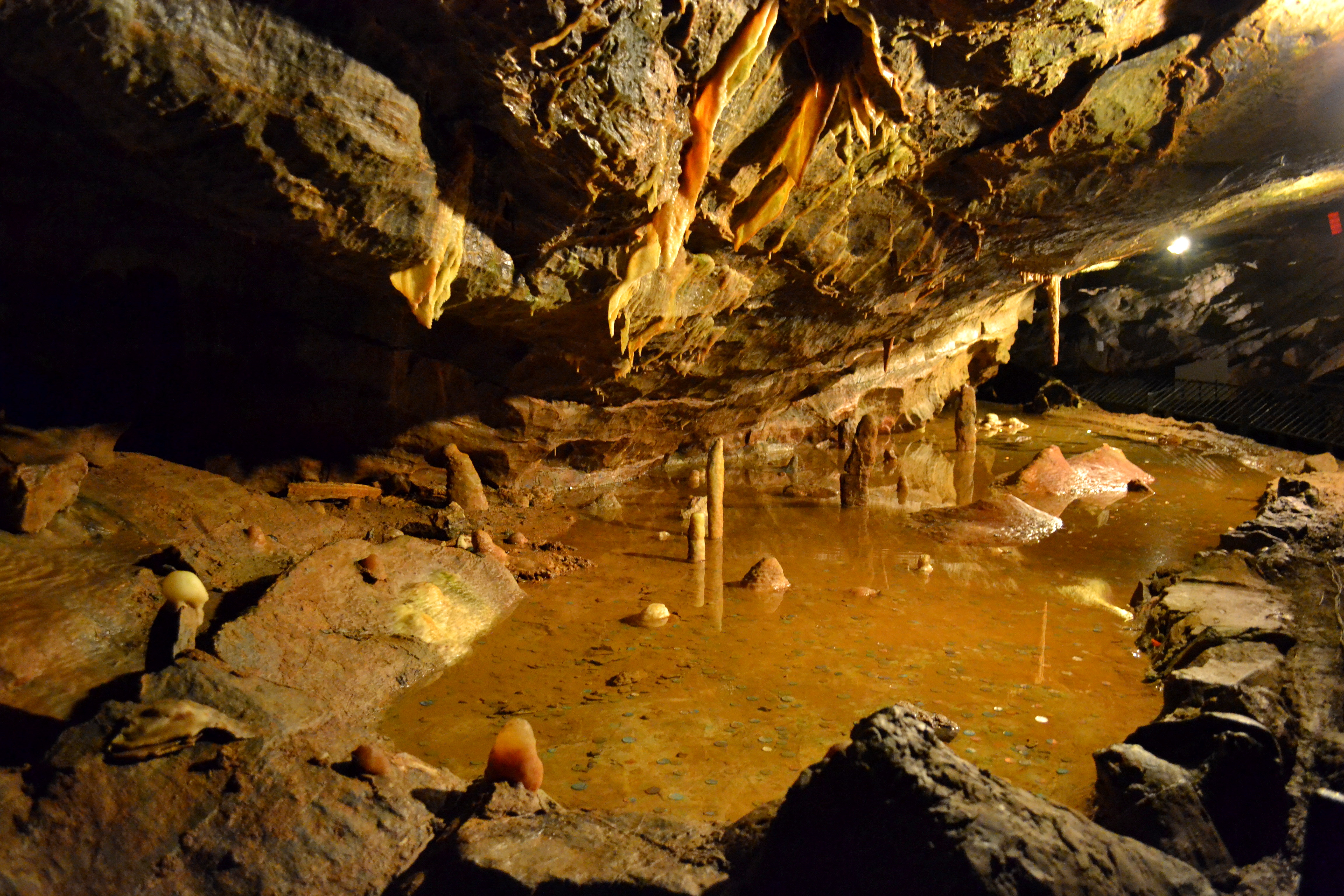 The caves at Cheddar form an intricate and deep network of caverns hollowed out naturally by the action of water, over millennia.

The caves were formed by the chemical reaction between water and limestone, which makes a weak carbonic acid.  Rainwater easily erodes this rock, dissolving the limestone.

A body known as Cheddar Man was found in the caves, dating from 7000BC.  It is Britain’s oldest complete skeleton, and DNA tests have shown that his descendants still live in the area today.

This amazing waterfall has become fossilised over millions of years, turning to stone.

The caves also contain a 13,000 year-old mammoth carving.  Some of the caves are full of water, creating the largest underground river cave system in Britain.

The Cheddar Gorge Cheese Company produces 2000 total cheddars a year, and a portion of these, 250 cheeses are selected to mature for 12 months in the caves, giving them a distinctive strong flavour.

We were lucky enough to see the cheese makers come down to retrieve some of the cheddars from the cave while we were there.

Wandering through the caves, they become increasingly impressive as you go deeper underground, and further into the chasms. We stood in wonder marvelling over one or two caves on the way in, where there were stalactites emerging from the roof of the cavern, and colourful and strange formations of the rock; yet through the next passage was a chamber even larger and more splendid, with more colours and crystallised, metamorphosed stone.

In this special cave, water drips from stalactites into the pool, and the ripples spread out.  This cave is known as ‘St Paul’s’.

This amazing miniature cave is full of beautiful reflections of stalagmites in the water, and is concealed within a little alcove in the cave wall.  Below is the side view of the alcove.

What struck me was the massive scale of the caves, and the fascinating ways the water had twisted and changed stone into something smooth and fluid-like. Cold to the touch and unyielding, the original rough-hewn rock had in places become as smooth as marble, and the way it flowed down and along crevices made it seem like a frozen liquid.

The cave system leads on further to reach the grand chamber of ‘King Solomon’s Temple’, which lies a quarter of a mile in, with 400ft/ 130m of solid rock above it.

This is a calcite waterfall – above it is another chamber.