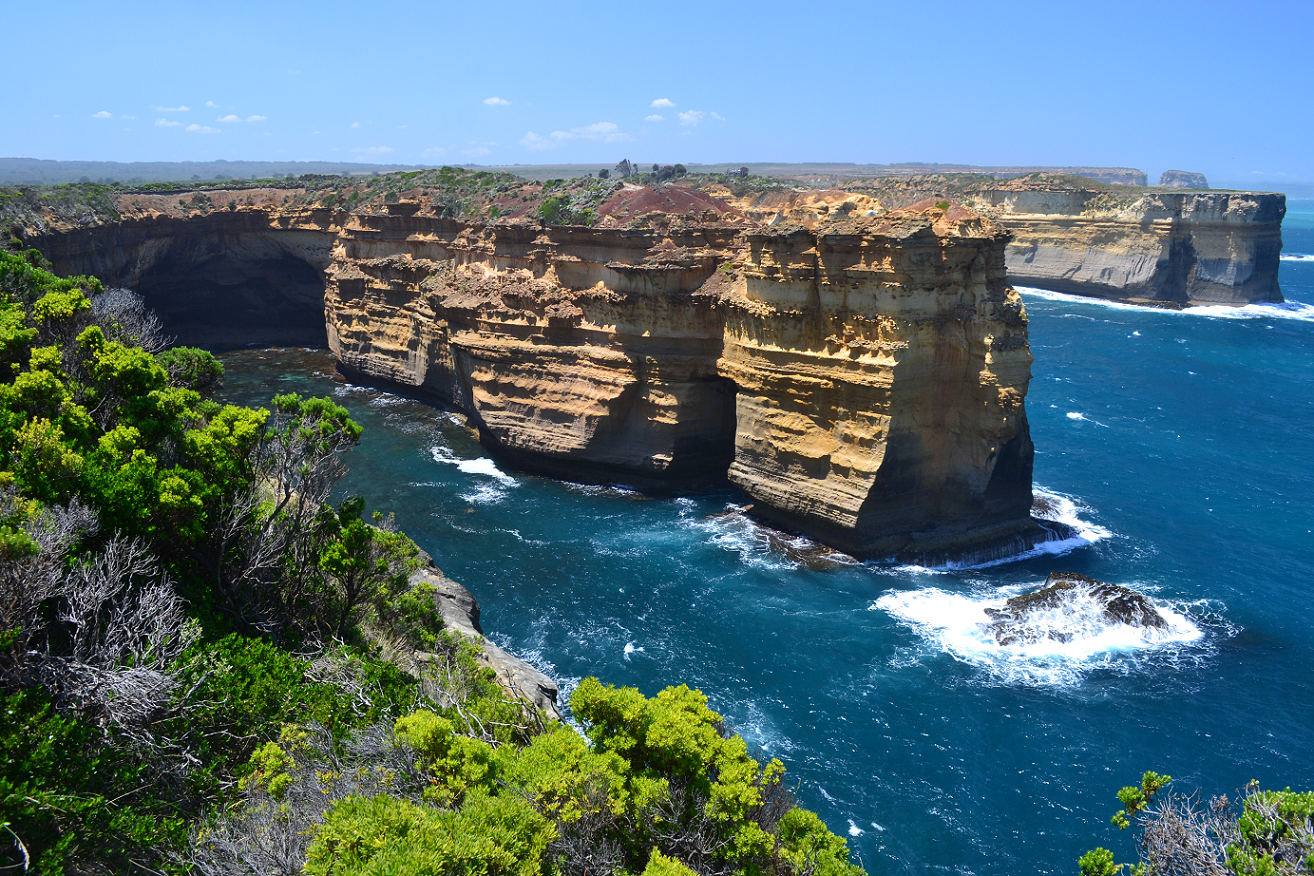 A guide for independent, budget-savvy travellers

The Great Ocean Road is one sight you won’t want to miss if you’re visiting Melbourne or Australia’s southern coast. The wild, ice-blue waters of the Southern Ocean smash against spectacular high cliffs, forming dramatic and beautiful features like the Twelve Apostles and Loch Ard Gorge.

Australia is a challenge for any budget-conscious traveller. With car hire starting at around AU$110 (£60) a day, renting a vehicle can really eat into an already-stretched travel budget.

So how can you explore the Great Ocean Road on a budget? Or if you just don’t want to drive? It’s perfectly possible to enjoy this epic road trip even if you don’t have a car. I’ve done it and want to share my tips here, to help other independent travellers discover this amazing coastline on a shoestring budget.

Why travel the Great Ocean Road by bus and bicycle?

Car hire places are few and far between along the Great Ocean Road. The towns in the national parks around here are small, and if you arrive in a small town like Port Campbell without your own vehicle, leaving by bus is the only option.

If you do want to consider hiring a car in the major towns, get quotes from a few different companies. In my experience the cheapest car hire is Thrifty.

Getting to the Great Ocean Road by public transport

The Great Ocean Road is carved into the splendid coastline of Victoria, and runs from Warrnambool to Torquay.

From Melbourne and the east

As you’d expect, reaching the Great Ocean Road from the eastern side by public transport from Melbourne is pretty straightforward. Commuter trains run regularly between Melbourne’s Southern Cross railway station and Geelong. From Geelong, there’s a daily bus service to Apollo Bay, stopping at Torquay and Lorne. At Apollo Bay you can change buses and get one heading up to Warrnambool.

From Adelaide and the west

Approaching the Great Ocean Road from the western side takes a little more forethought. Buses run from Adelaide via Mount Gambier to Warrnambool. Premier Stateliner is the company operating in South Australia, then at Mount Gambier you can catch a V/Line train to Warrnambool. Then from Warrnambool take V/Line’s Great Ocean Road bus onwards to Apollo Bay. Change at Apollo Bay to head onwards to Geelong, which connects by train to central Melbourne.

It is possible to explore the Great Ocean Road by public transport, but it will need a bit of planning because it doesn’t run every day. A bus runs three times a week along the coast from Warrnambool to Apollo Bay, and vice versa. It drives along the Great Ocean Road so the views you get are the same as in a car. It also stops off at the main sights of the Shipwreck Coast: the Bay of Islands, London Bridge, Loch Ard Gorge, and the Twelve Apostles.

How to get the Great Ocean Road public bus

It’s simple to travel between Geelong and Melbourne as there are frequent trains throughout the day, operating every day.

Interstate buses between Warrnambool in Victoria and Mount Gambier in South Australia run every day except Saturday. Timetable here. Note that the train journey from Melbourne to Warrnambool at the top of this timetable skips the Great Ocean Road, so ignore it if you want to visit the coast. You could however take this train one way if you want to head back to Melbourne from Warrnambool, instead of heading onwards to Adelaide.

Bear in mind the Great Ocean Road bus and its connecting services may not operate on public holidays.

Scheduled stops at all the major sights

The service is intended for tourists and travellers so has five must-see stops such as the Twelve Apostles built into the timetable.

However the time at each place is limited: 10-15 mins for most sights and 30 minutes at the Twelve Apostles. There’s enough time to walk quickly from the bus to the viewpoints and enjoy the scenery and take a few photos. You’ll want to be promptly off the bus and time yourself in order to make the most of the stop. At the Twelve Apostles the bus stops in a coach park on the other side of the road, so it takes a couple of extra minutes to go through the tunnel under the road and cross to the other side.

What the Great Ocean Road bus gives you

The Great Ocean Road bus is a really good way to at least get to see all of the major natural features of this coastline. For those without their own wheels it’s a chance to experience this classic road trip, which you otherwise just wouldn’t be able to do. If you don’t have access to a car, the bus is the only way you’re going to have the opportunity to travel the Great Ocean Road in its entirety.

What the Great Ocean Road bus doesn’t give you

One thing the bus stops don’t give you though is the time to explore around the viewpoint. You can’t get down to the beach or walk along the coast path, it’s just a case of going to the best place to look out, staying there a bit and coming back.

You can combine accommodation with this bus ride to make the most of one or two areas. I took the bus from Warrnambool to Port Campbell, stayed overnight there, hired a bike from the hostel and cycled along the coast to Loch Ard Gorge.

Hiring a bike and cycling along the Great Ocean Road is doable – but not the most pleasant cycle. How you’ll find it depends how used you are to cycling fairly long distances and on roads where traffic is going at 60mph.

Hostels and tourist information centres along the Great Ocean Road often hire out bikes, and they aren’t expensive to rent for a day.

So what is it like to cycle the Great Ocean Road?

My girlfriend and I hired bikes from the hostel in Port Campbell, and we planned to cycle to the Twelve Apostles. Instead we ended up stopping at Loch Ard Gorge and spent the day there, exploring the area thoroughly.

I’m not sure I would repeat the experience of cycling the Great Ocean Road in all honesty. It wasn’t a pleasant cycle despite the views and the glorious sunshine; at times it felt pretty dangerous. We were constantly being overtaken at speed and were not always visible to drivers, for example when going around a bend. The road also slopes up and down which can slow you down.

However it did mean that we had independence and could explore freely. We had an amazing day at Loch Ard Gorge and I wouldn’t have traded that. Going by car wasn’t an option for us as there were no rental places in town where we were staying, and we hadn’t planned ahead on this occasion. So going by bike was really the only way to get to explore in more depth than the short stops on the bus. I’d have felt pretty frustrated to have come all that way and only seen the Great Ocean Road sights by bus.

Coming from Britain where there are well-maintained, easily-accessible coastal footpaths around the entire island, it was a surprise to me that it’s not straightforward to walk the Great Ocean Road. One of my mistakes was assuming this was possible and not making other transport arrangements. Hopefully this will change in the near future and one day soon it will be possible to walk the Great Ocean Road and take in its scenery on foot.

You can’t really walk along the Great Ocean Road itself because there’s too much traffic moving too fast, and nowhere to walk that’s not in the road.

Where is good to walk along the Great Ocean Road coastline

Any of the geological sights are rewarding to explore on foot, when you have longer to spend there and do justice to the surrounding natural beauty.

There are also walks through gorgeous scenery around the towns of the Great Ocean Road, for example near Port Campbell and Apollo Bay. The tourist information office in Port Campbell provides excellent local tips for where to go for the best walks.

Touring the Great Ocean Road: by bus, bike or on foot?

I recommend combining bus, bike and foot travel to get the most out of your trip to the Great Ocean Road without a car. The bus enables you to cover the distance, while travelling by bike and on foot allow you to appreciate the scenery at a slower pace and immerse yourself in the natural beauty of the Great Ocean Road’s national parks.

Have you explored the Great Ocean Road? What was your experience? Have you used the bus, and if so what did you think?

If you have any questions about the bus or where you can walk along the Great Ocean Road, drop me a comment below and I’ll help as much as I can!