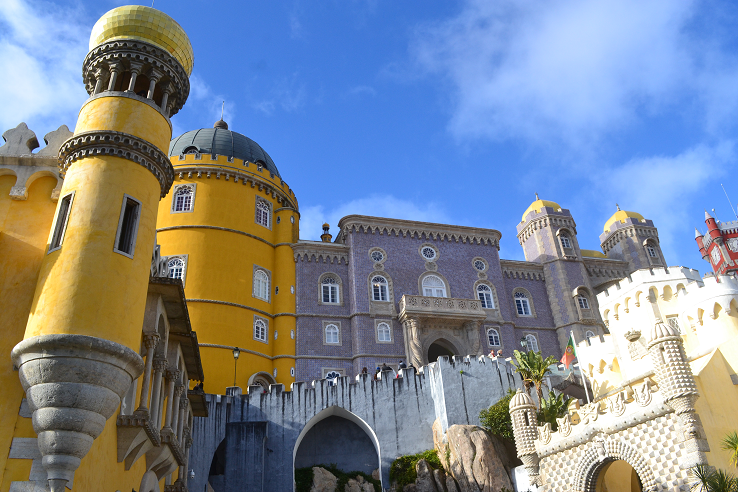 The enchanting town of Sintra lies in the hills west of Lisbon, towards the Atlantic coast. Sintra’s picturesque sights are perched on top of the peaks surrounding the town. Arriving by train from Lisbon, you glimpse glittering Pena Palace and the atmospheric Castle of the Moors from a distance.

A very short history of Sintra: from Romans to Islam to Byron

Sintra was occupied by the Romans 2,000 years ago, and from the 8th century by Islamic Moors from North Africa. These were the Moors who colonised southern Spain, building the Alhambra and Cordoba’s Mezquita. During the Crusades, Sintra was fought over by Christians and Muslims, as part of the Caliphate of Cordoba. Later Sintra was influenced by European baroque style and the Romantics, becoming a home to Byron for a time.  The rich and varied history of Sintra is reflected in its architecture.

Pena Palace is a fascinating combination of architectural styles. Though constructed by a prince only in the 19th century, its crenellated battlements, turrets and portcullis take inspiration from the castles of medieval Europe. These parts of the palace are often marked with the stylised cross of the Crusaders. Other sections mimic minarets, and the arches and windows found in the Alhambra and across the Islamic world. Still other areas indicate baroque and Gothic influences. Pena Palace is a fusion of regional architectures, and manages to transcend time in showcasing, through a single building, the varied history of this part of Portugal.

Quinta da Regulaira is a grand house and landscaped park, but not like any you’ve ever seen before. The park is a warren of dimly-lit underground passageways, and enchanting emerald pools. Stepping stones are flanked by vibrant greenery and waterfalls. There are fairy tale stone turrets you can climb, and the haunting Well of Initiation, inspired by Masonic rite. It’s a landscape that feels like the realisation of a dream.

Exploring the park inspires a childlike wonder, as you delve into the unpredictable world of Quinta da Regulaira. The design feels like a visionary has just allowed their imagination complete free rein – and fantastic features seen only before in dreams have been brought to life. Fantasy becomes reality at Quinta da Regulaira.

Castle of the Moors

The Castle of the Moors sits on a hilltop opposite colourful Pena Palace, and is one of Sintra’s oldest sites. It looks like the Great Wall of China, on a smaller scale. Beautifully rugged, crenellated stone walls zigzag across the hilltop, forming this 8th century fort. Views from the hilltops look out towards the coast.

Sintra has lots more sights, and if you have time I recommend spending longer than a day here. There are atmospheric ruins such as the Convent of the Capuchos, and more examples of beautiful Islamic style architecture, like the Monserrate Estate.

I stayed in Lisbon and visited Sintra from there, but I would return just to stay in Sintra so I could have time to see everything. I loved Sintra – it’s a striking, magical place.

Tip: when to visit to avoid crowds

Although beautiful at all times of year, Sintra is a good destination to choose for a winter break. I visited in December, when there’s still a lot of sunlight but no crowds.

How to get to Sintra from Lisbon

Trains leave Lisbon’s Rossio station for Sintra throughout the day. The journey takes 40 minutes, but some trains stop more frequently and take longer. A return ticket costs around €5.