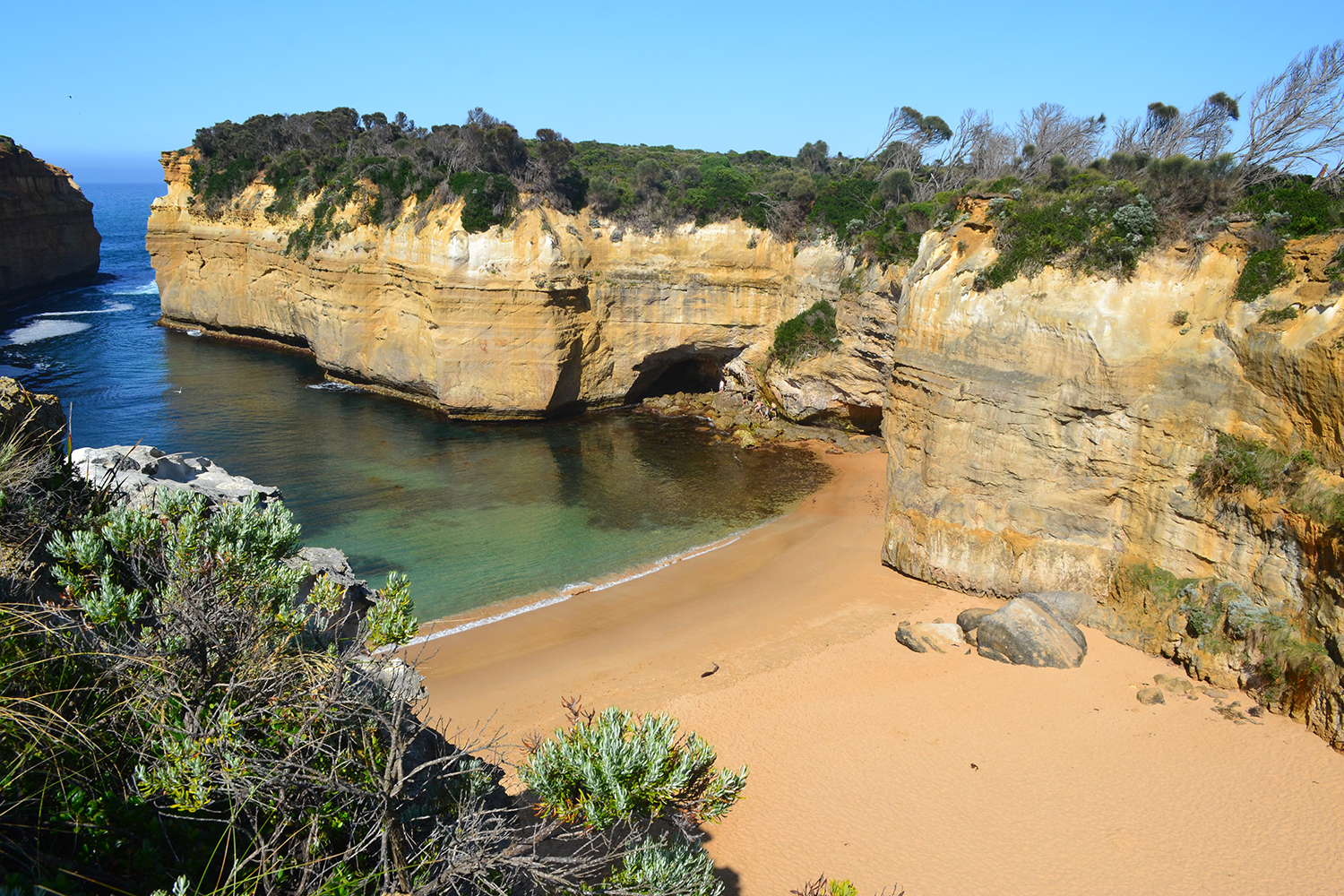 Beautiful Loch Ard Gorge has a dark and terrible past. On a summer’s day, it’s one of the most gorgeous small coves anywhere in Australia – but the legacy of tragedy still haunts this sublime beach.

The coastline of Australia’s Great Ocean Road is immense and dramatic. Sheer cliffs stand imposingly above a wild, rough ocean. Near Port Campbell, the vast cliffs plunge dramatically down into a gorge with a picturesque beach. The gorge is a tear drop in the landscape, where caves and golden sand are lapped by azure waves.

The sea here is the wild Southern Ocean. Massive ice-blue breakers with foaming crests dash against the rocks at the edge of a continent. The destructive power of the waves has created this dynamic coastline, forming fantastic features like London Arch and the Twelve Apostles. It is a beauty born in destruction.

Nowhere is the destructive nature behind the beauty as vivid as at Loch Ard Gorge. The gorge was named after a tragedy that took place there one night in the nineteenth century.

The Loch Ard: a ship of hopes and dreams

In 1878, a ship called the Loch Ard set sail from Liverpool, bound for Melbourne. Its passengers were heading to the new world, seeking new lives on the other side of the globe. They were leaving behind the old world of Europe, with all its problems.

Eva Carmichael was 18 years old, and set off from Dublin with her parents and three sisters. They left Ireland forever, and headed to Australia in search of a better life.

Among the ship’s crew was a young man called Tom Pearce, also 18 years old. He left his family in Gravesend, near London, to serve as a midshipman on board the Loch Ard as it sailed to Melbourne.

After a voyage of thirteen weeks, the Loch Ard was off the coast of Australia. She was within striking distance of her destination, and due to arrive in Melbourne the following day.

But that night, while passing Port Campbell and its nefarious Shipwreck Coast, the vessel veered off course in a stormy ocean. The Loch Ard struck a rocky island, and the ship sank in fifteen minutes.

It was a stormy night when the ship went down. It was all over so quickly, and in darkness. There were no settlements on the coast to signal for help.

Tom was washed into the opening of the gorge nearby, and swam to the beach. From the safety of the beach he spotted Eva, struggling in the ocean. She could not swim, and was only dressed in a nightgown. Tom swam out, battling the storm and the waves once more, and rescued her.

Tom and Eva were the only two survivors. On top of the cliff at Loch Ard Gorge lies a graveyard, dedicated to the 52 people who lost their lives, including five members of Eva’s immediate family, and all the crew except for Tom.

For the rest of that dreadful night, Tom and Eva sheltered in a cave. At dawn, Tom climbed up the cliff to search for help. Local farmer Mr Gibson was out mustering his cattle, and saw Tom climbing the cliff. When Tom told him of the shipwreck, Gibson walked back the 10 miles to his home, and fetched rope and companions to help. Tom returned to the cave and to Eva.

After helping Eva out of the steep-sided gorge, the farmer brought the two survivors to his home at Glenample Homestead. He and his wife took care of them. Eva stayed there recuperating for several weeks. The farmer informed the authorities, who came — along with journalists — to explore the remote area of Loch Ard Gorge.

The story of the shipwreck caught the popular imagination, and the public longed for a happy ending. Tom was rewarded for his heroism in saving Eva. The public wanted Tom and Eva to marry — it was a romantic idea after the tragedy and the dramatic rescue. They had also spent a night together alone in a cave, and Victorian morality hinted that they ought to marry. But after they left the farmhouse Tom and Eva never saw each other again.

Tom returned to work as a crew member on another ship, and sailed back to England. Eva too left Australia soon after and went home to Ireland, to be with her brother William, the only surviving member of her family.

Eva married another man, Thomas Townsend, and they settled in Ireland. Townsend was an English emigrant to Australia, who had been working at the museum in Warrnambool. He met Eva after becoming involved in investigating the Loch Ard shipwreck, and returned to Europe with her. She kept in touch with the Gibsons at Glenample Homestead for the rest of her life.

Tom married on his return to England, and started a family. His wife was a relative of one of his crewmates who had died on the Loch Ard. Tom went on to become captain of his own ship, but was shipwrecked again in 1879, this time off the Irish coast — only one year after the Loch Ard.

The legacy of the Loch Ard

Loch Ard Gorge is an achingly beautiful spot. Down on the sand on a summer’s day, looking out into the sparkling sea that fills the gorge, it’s difficult to imagine that nightmarish night. But up on the cliff tops it’s a different story. There the viewpoints look out at the wild, rough ocean beyond the coast, and the graves of the dead cast long, dark shadows in a windswept graveyard.