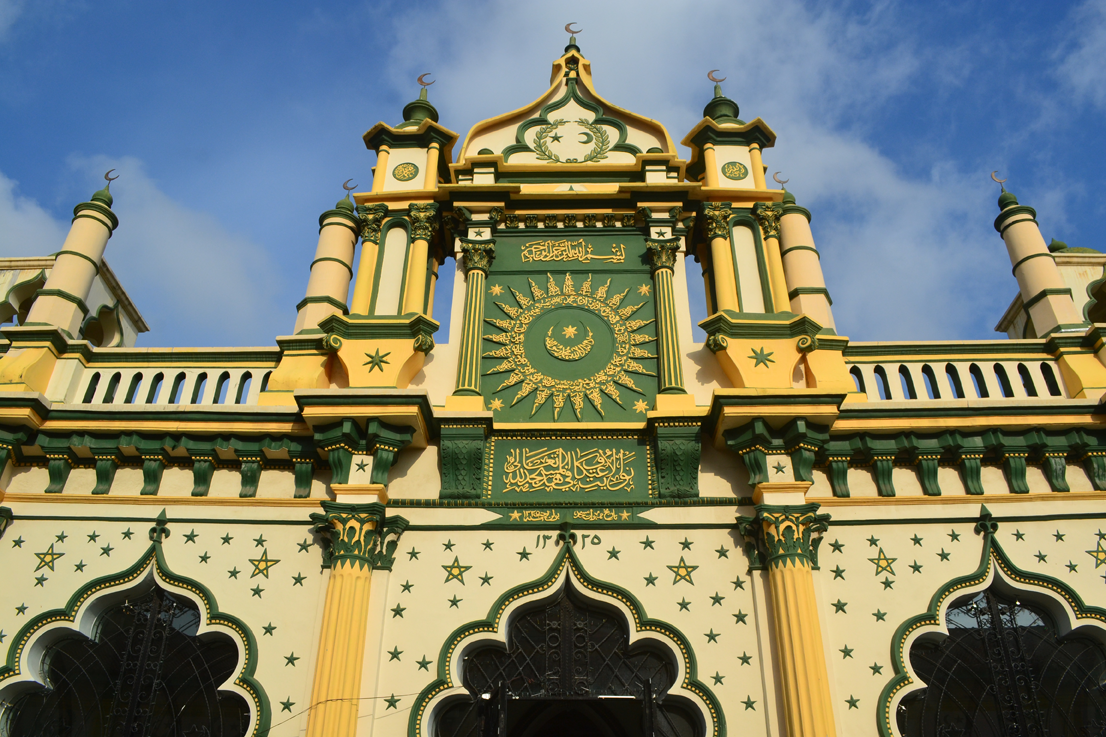 Singapore is home to some of the most exquisite mosques I’ve ever seen. This deeply diverse city state has it all in terms of religious architecture, from Hindu and Confucian temples to Anglican churches. But it’s Singapore’s mosques that are the jewel in the crown.

Like the rest of Singapore, the nation’s mosques take their influences from all over the world. Their rich architectural heritage evokes the spare beauty of Arab mosques as well as Mughal forts in northern India.

As you might expect, Singapore’s Arab quarter has a number of mosques. The streets around Sultan Mosque have characterful names, such as Muscat Street, Baghdad Street and Haji Lane.

The spectacular Sultan Mosque dazzles in gold and white – it is brilliant and immaculate. The domes of Sultan Mosque tower over the precinct surrounding Arab Street and Muscat Street.

Lying in Little India, the Abdul Gafoor Mosque is an absolute gem. It’s tucked off a side street and doesn’t get many visitors, but in my view it’s as beautiful as Sultan Mosque. Abdul Gafoor Mosque has yellow and green decoration on white, with stars, suns and crescent moons. It is designed in the fortress style of the Indian Mughal mosques, rather than the white domes of the Arabian peninsula.

Malabar Mosque is covered entirely in blue tiles, from ground level up to the minarets. Situated on a road interchange, it’s less accessible than Sultan Mosque, which has pedestrianised surroundings, but it’s worth crossing the road to view Malabar Mosque up close.

How to visit mosques in Singapore

You don’t have to enter a mosque to enjoy its beauty, as you can see a lot from the outside. But if you do go inside, you can explore deeper, and see how this pure and simple architecture is reflected in the interior.

It’s straightforward to visit mosques in Singapore and Malaysia. Some mosques have published opening times, long clothes to borrow if you need them, and friendly, free tour guides who will tell you about the mosque. Smaller mosques that aren’t visited as often don’t have this set up, but you can still visit.

If you wander in, and behave respectfully, you’ll be welcomed. If anyone asks why you’re there, just say you’d like to look around the mosque. I’ve visited many mosques in Asia, and every time people have been happy that I was interested in seeing their mosque.

How to visit Sultan Mosque

Sultan Mosque is well set up for visitors, with established opening times. Visiting hours are frequent and are fixed around daily prayer times. It’s likely your visit will coincide with a chance to tour the interior, unless you visit on a Friday, when the mosque is closed to the public. Sultan Mosque has plenty of gowns for visitors to borrow if wearing shorts or vests.

How to visit Abdul Gafoor Mosque

The attendant at Abdul Gafoor Mosque was friendly and welcoming. He arranged an impromptu guided tour for me, along with two other visitors who happened to be there. The couple I was with were both given long robes to cover their clothes, but I was dressed in a t-shirt and light trousers which was fine. This mosque has no published entry times displayed, just because it doesn’t get many visitors (unlike Sultan Mosque), but it’s easy to arrange to go inside.

See Singapore’s mosques for yourself…

Of all the impressive buildings in Singapore, it was the beauty of the mosques that left the greatest impression on me. If you have any questions about visiting mosques in Singapore or Malaysia, let me know in the comments below.