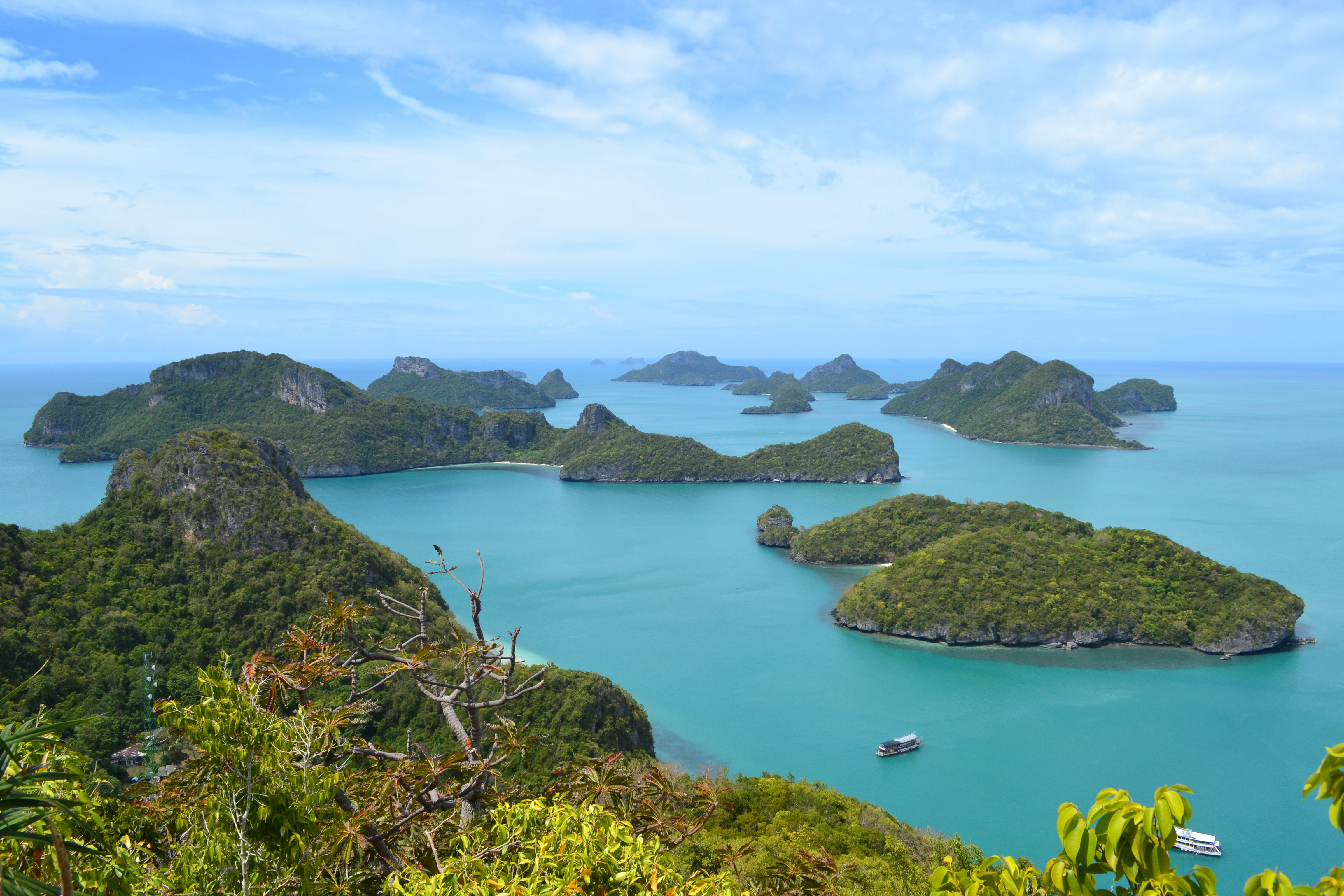 One of the sights I’ve been most looking forward to seeing in Thailand is Ang Thong National Marine Park. The National Park incorporates a vast number of small islands in the Gulf of Thailand. These forested, rocky islands are surrounded by a smooth azure ocean, and have outstanding white sand beaches.

The islands of Ang Thong are uninhabited, except for a park ranger, and they’re carefully protected from pollution, litter and poaching. Some of the islands’ inhospitable rocky peaks are home to the birds whose nests are prized for birds’ nest soup. The park rangers patrol, and protect the rare birds from poachers who scale the cliffs to reach them.

We took a boat trip to the National Marine Park from neighbouring island Ko Samui. Once we reached the national park, we got on kayaks that were launched off the back of the boat. We paddled past three beaches, through a cave tunnel, and under overhanging cliffs like the one below.

We landed on the beach at the small paradise island of Ko Mae Ko.

Mae Ko has a saltwater lagoon at its centre, and we hiked up to a viewpoint to look over it.

A cacophony of insects surrounds the lagoon. The water is a gleaming green, and infested with snakes.

Here is the view while climbing up to the green lagoon:

Nothing is allowed to be left on the islands, so the piers used are temporary. This one is made of floating blue plastic cubes, linked together to form a jetty. Longtail boats transfer passengers from the larger boats, which remain further out in the deeper water, and the longtails come alongside the floating jetty.

The beach we landed on by kayak, on Ko Mae Ko.

After returning to the boat we set off for another island, Ko Wua Talap. This larger island has a peak from where you can look out over most of the islands in the national park.

There are viewpoints every 100m while hiking up the hill on Ko Wua Talap. It’s a tough hike, because the trail runs 500m up to the top of the hill and is very steep. It’s also hot and very humid.

For 400m of the route there is a path, where steps have been cut out of the steep rock. For the last 100m, the path is still under construction.

The steps end and there are sharp boulders to scale, with the help of one or two ropes to pull yourself up with. To make matters worse, the demolition work to prepare the steps under construction has destabilised what were formerly stable rocks. As you stand on them, these great boulders wobble around. The feeling of standing on the edge of a deadly precipice is real, as it’s just sheer rock at the top of the island, with a 500m drop below.

Once you get up there, you’re on the highest point of the surrounding islands, and have a fantastic view over Ang Thong National Park. However, it is pretty terrifying because the high viewpoints are precarious. I risked life and limb to get this photo above.

I climbed up to a construction site teetering on the edge, with an outstanding view out to sea. The boulders here were not only very sharp, but they rocked and moved about with each person’s individual movements.

I clambered further up until I was above the impromptu construction site, found a perch and took a few photos. Above me the cliff stretched upwards in spiny, rocky, vertical gulleys. People coming down from above were meeting with those coming up from below, and a delicate manouvering procedure took place as people tried to keep their balance 500m up on a cliff while balanced on wobby boulders with no flat surfaces, and only very tight gaps to pass by each other.

Although I love climbing rocks, this point was enough for me. I decided to forgo the remaining challenge up to the ultimate precipice, and instead went down to the beach.

Cooling off in the lovely cool blue sea of the marine park was just what the body needed after a hot, steep and terrifying climb.

It’s straightforward to arrange a tour of Ang Thong while staying on Koh Samui or Koh Phangan. There are several tour operators to choose from. I went with Samui Island Tour for 1890 baht (£40), but I wouldn’t recommend them. They crammed as many people as possible on the boat even though there weren’t seats for everyone and many couldn’t see or hear the demonstrations. The staff weren’t professional or polite and it was pretty clear they were only interested in making money.

The ferry company Lomprayah also run tours to Ang Thong. Lomprayah operate catamarans between the three islands Ko Samui, Ko Phangan and Ko Tao, and across to the mainland and even up the Gulf Coast as far as Bangkok (stopping at Chumphon and Hua Hin). They offer kayaking and a buffet lunch on their island trip, for about 1600 baht. I haven’t tried their Ang Thong day trip so I don’t know what it’s like, but I’ve had good experiences on their ferries in the Gulf Coast and they also provide good connecting buses, e.g. from the Chumphon pier into the town, as a helpful extra, so if I was going again I’d choose them.

You can also stay in accommodation actually inside the National Marine Park, on the main island of Ko Wua Talap. The bungalows there aren’t expensive and after about 3pm the tour groups leave so residents have the island to themselves.