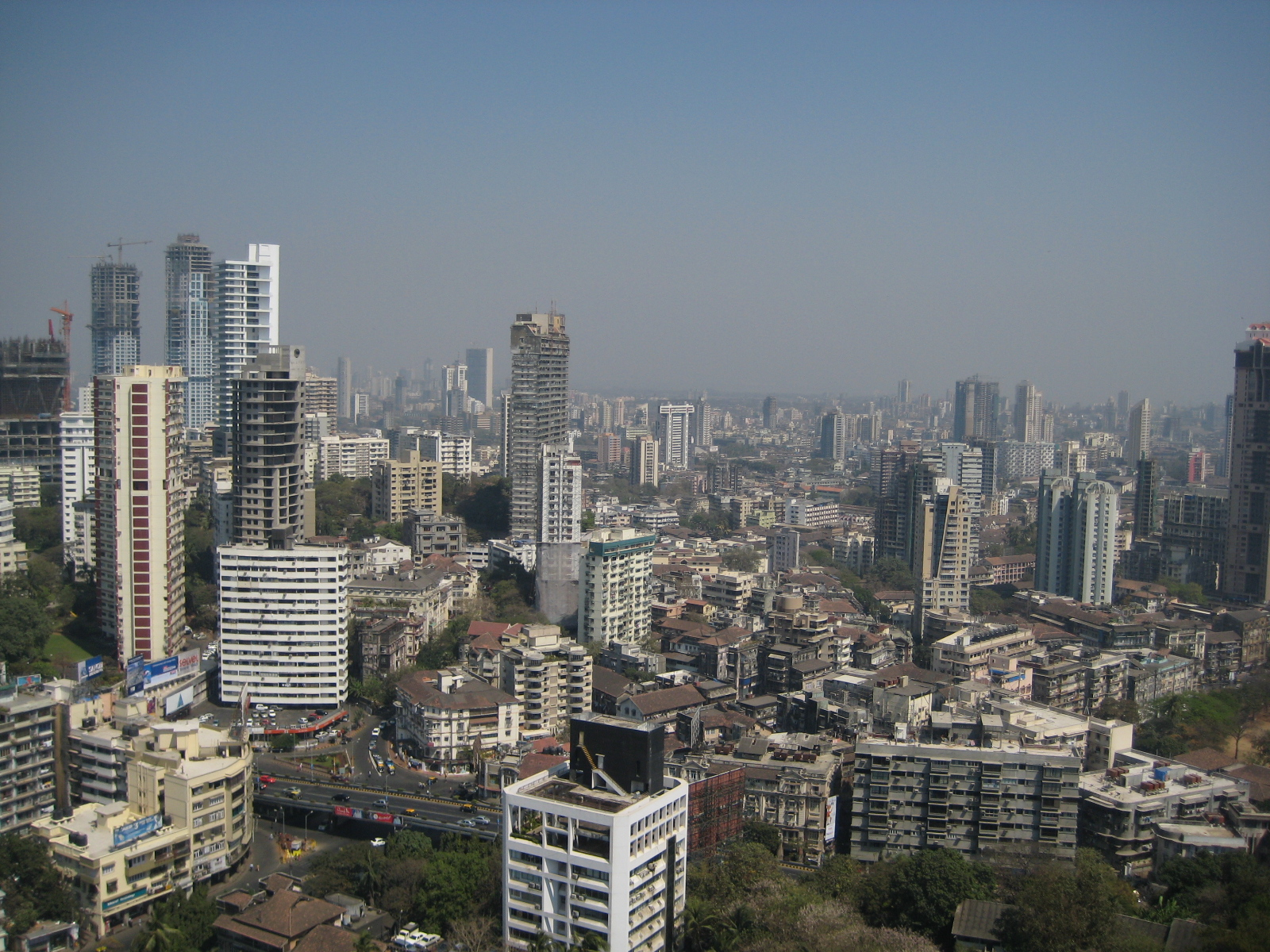 I arrived yesterday and saw the sunshine and palm trees beckoning to me outside the airport.  Had a very interesting taxi drive from the north of the city where the airport is into south Mumbai.  Drove past the slum Dharavi, and saw in the distance the looming high-rises of the suburb Bandra.  The drive took about an hour and a half in the traffic, (but I don’t think it would be much easier or quicker to get across London).  The taxi driver pulled off the road and stopped for fuel along the way.  I was told to get out, and it was then that I realised the driver didn’t speak English.  He didn’t know where the hotel I was heading to was, either, resulting in us driving up and down Shaheed Bhagat Singh Road asking various people for directions and doing U-turns.  Luckily I had the hotel’s address written down, but the taxi driver was keen to drop me off almost anywhere, so I had to refuse to leave the cab a couple of times, but we eventually made it.

Then the hotel had no record of me having booked, but luckily they still had space.  There is scaffolding directly outside my window and I soon realised why, as cascades of rubble were flung down from above.  During the day there is permanent drilling and the loud noise of masonry falling past my window; it seems that they are doing some kind of demolition work on one of the floors above.  The whole hotel is encased in scaffolding, and there are workmen walking past outside my window.  At night it is not much better: last night someone got locked out and spent a long time hammering on and ringing at the doors to be let in – but no-one got up to let him in.  I heard one woman go out and speak to him and return again, while he was still banging and pressing the bell continually.

After arriving I went out and walked to a park called Horniman Gardens.  It is in a roundabout in the middle of the very busy Shaheed Bhagat Singh Road, and functions as a kind of oasis of calm amid the chaotic streets.  Although I actually felt quite relaxed walking in the streets, even on the first day and after an overnight flight.  There are no lines on, or lanes in, the road, but traffic going in opposite directions is separated by rows of black and yellow concrete blocks, with gaps in the higher ones for pedestrians to cross (the lower ones everyone steps over).  There are zebra crossings with traffic lights, many of which have a very handy countdown system that tells you how long you have before the lights change, whether they are on red or green.  The rules of the road seem to be ‘go where you like’, which applies to cars, pedestrians and animals.  Though traffic going in opposite directions is separated, it doesn’t matter if they make U-turns where the yellow and black concrete blocks end.  No type of traffic (bus, car, pedestrian, animal, handcart) seems to have right of way over anybody else – everybody just goes in their direction and tries to avoid getting in the path of everyone else, sometimes controlled by a traffic light system that appears more indicative than compulsory (both for pedestrians and vehicles).  And it works – in fact quite brilliantly.  It actually feels very liberated and inherently equitable.

The funniest thing I saw today was a black and white cow meandering, placid and unphased, across the centre of a busy crossroads.  Cars were beeping at it, as the lights were changing and they were running out of time to turn down that street before the opposite traffic started coming across them.  The cow simply changed direction; it had been heading off the road then it turned back and decided to block another few lanes from a different angle.  This distraction enabled a whole cohort of pedestrians to cross anywhere at will, while the traffic was stilled (I was one of them).

I have been wandering a lot; it is very enjoyable in the perfect weather and as part of the hypnotically fluid movement of streets that flow through the city like veins.  Both yesterday and today I walked to the Gateway of India.  It is an iconic monument that stands beside the sea in the district of south Mumbai called Colaba.  The Gateway of India is surrounded by the large harbour with many boats.  The arch was built in 1924 to commemorate a royal visit of 1911 by George V, at a time when visitors to India arrived into Bombay from the ocean side and disembarked at the point where the Gateway of India arch stands.

In the morning I’d had the aim of finding a supermarket, internet cafe and a particular bookshop. I wandered about the street I thought they were meant to be in, but it consisted of apparently endless banks.  Eventually to escape from the monotony of bank after bank, and to get my bearings, I went into a cafe, which was very nice as an environment, but which went on record as giving me possibly the worst fish and chips I have ever eaten.  Afterwards I wandered the backstreets looking again for the shops I wanted.  I bought some water from a stall and while escaping from a child pursuing me doggedly for money, I stumbled on the supermarket after all, when the woman immediately in front of me turned and disappeared off the street into a shady black interior, and I looked in to see that it was just what I’d been looking for all along.

I walked along Road No. 1 to the Oval cricket maidan, and then on to Marine Drive, a very long esplanade that follows the curve of the city around the bay.  I sat on the edge of the wall, looking at the sparkling water and watching the crabs on the sea defences below.

Later I went back past the High Court and the University of Mumbai.  There are these really nice Banyan trees with thick trunks made up of multiple stems, and they have kind of liana threads of roots growing down from their branches.

There were a lot of dogs laying sleeping on the warm pavements, and on the wall and benches along Marine Drive.  They weren’t bothering anyone, and nobody bothered them.