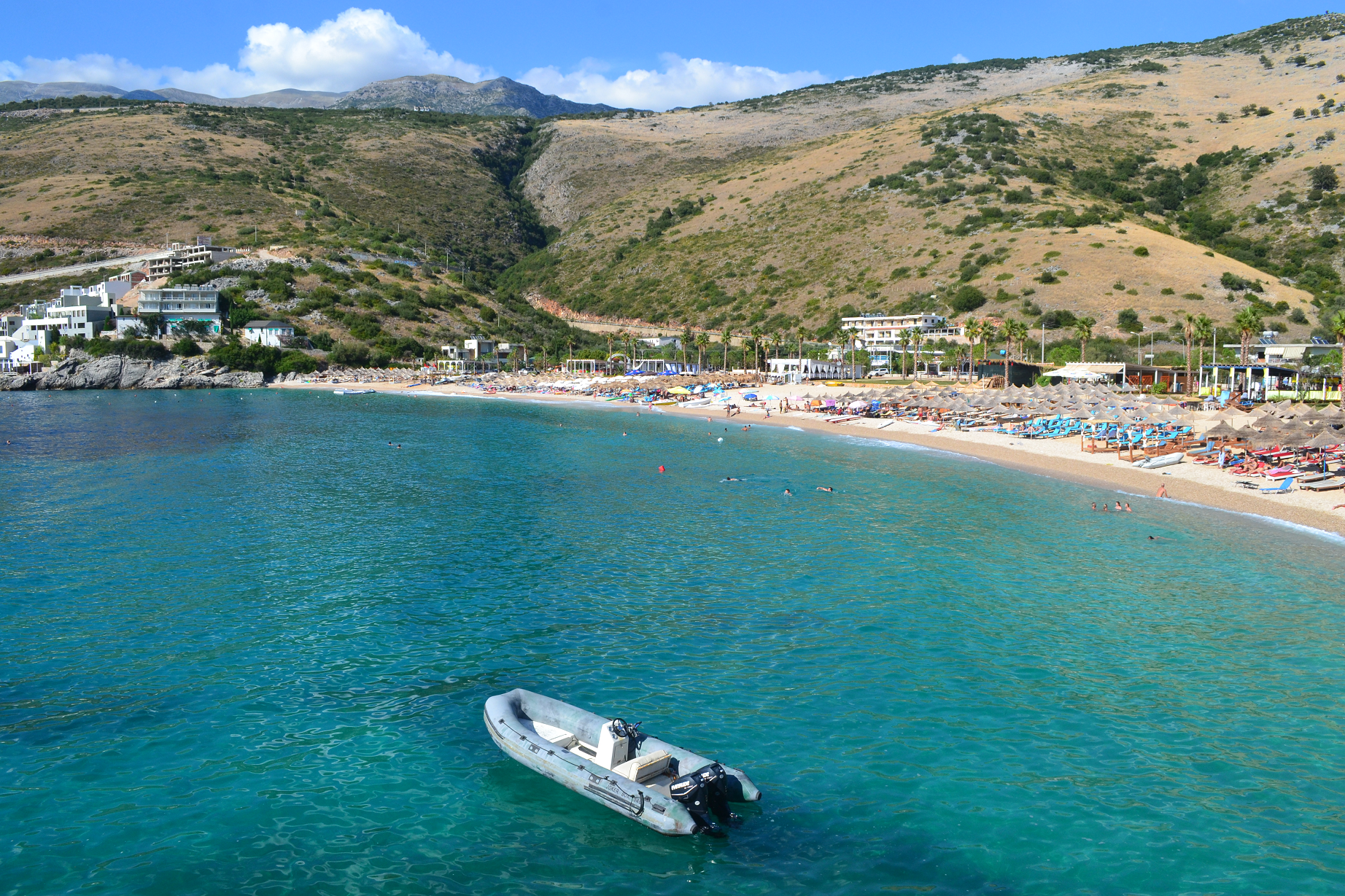 Just north of Greece lies southern Albania, and the breathtaking Albanian Riviera. This less touristed coastline shares the same Ionian Sea coast as Greece, and has a rugged, mountainous beauty all of its own. The Albanian Riviera stretches from Ksamil to Dhermi, in the southwestern corner of Albania. There’s a beautifully sited coastal road, which takes you through hairpin mountain passes, around bends with views of awe-inspiring scenery.

I’ve taken classic road trips such as the Great Ocean Road in Australia, and Albania’s Riviera is up there with the best of them, although it’s almost unknown. In fact if you like to travel off the beaten path, the Albanian Riviera is a quieter and more peaceful option than the famous road trips. Albania also the offers the possibility of genuine discovery through travel. The coast road passes through tiny traditional communities like Vuno, and you won’t find photos of the coast’s panoramic views in any printed guidebooks.

I took the ferry from Corfu in Greece to Saranda in Albania, opting for the slow ferry which takes one hour to make the journey. In Saranda I hired a car and drove up the coast to Himarë. We used Himara as a base for exploring the area. We also drove inland to the amazing Blue Eye spring, and south to Ksamil and spent one night there.

Here’s an itinerary for the Albanian Riviera:

The closest access point to the Riviera is to arrive in Albania at Saranda, having come by sea from Corfu in Greece. Saranda is a large town with several nice beaches, and a lot of facilities. The buildings are mostly communist blocks but in pastel colours they look great surrounding the bay, especially in Albania’s sublime light, which floods everything and enhances an already beautiful place. Saranda has a sheltered bay for swimming.

One of the first viewpoints that will definitely make you want to stop is the view that overlooks the beach at Borsch. A demonstration of Albania’s awe-inspiring landscape, at Borsch a steep-sided valley opens out from between mountains, forming a low level plateau as the river races to the sea. The broad edge of this valley is laced with a white beach, and a perfect azure sea.

A castle fortress on an island, Porto Palermo was one of my favourite places to visit on the Albanian Riviera.

Llaman Beach is a picturesque cove with unique topography. It’s a steep drive down to the beach itself, and the turning is off a bend in the road. If you don’t make it down there, it still looks good when seen from driving along the road in the mountains above.

We stayed several days in Himarë, and couldn’t have chosen a better place as a base. It’s a small town where you can relax, and has good beaches, delicious food, and amazing scenery within a short drive from the town.

Jala is developing rapidly, but there are still chances to get away from the crowds here and off the beaten track. Plus the views you get from the approach are incredible: rocky coast with white beaches and intensely blue, sparkling sea.

Between Jala and Gjipe lies the small village of Vuno, where the highway whittles down to a single carriageway in order to pass through its narrow medieval streets. When we drove through Vuno, the traffic consisted of several donkeys, which are still used by local families as transport, and can be seen carrying stacks of firewood or grazing loose by the side of the road. In villages like Vuno the traditional, pre-communist era houses flank the hillside, overlooking the spectacular coast. And life goes on much as it has always done.

Gjipe is longer a hidden paradise, in fact it’s well and truly been discovered, as can be seen from the extensive car park and the well-trodden trail down to the beach. However it is 100% worth a visit, as it has amazing clear sea and was the best place I snorkelled in Albania – with around 20m visibility – better than Ksamil and Himarë.

Located in the Butrint National Park, the town of Ksamil is home to white sand beaches, off-shore islands, and well-preserved ancient Roman remains. It’s in the far south of Albania, borders mainland Greece and lies directly across the water from the Greek island of Corfu. Easily reachable from Saranda and its ferry port, Ksamil is more touristy than the towns further north, but still interesting to visit.

The coast road is in good condition. The route was more mountainous than I had antipicated, with long steep ascents and descents. But it’s a beautiful, scenic and enjoyable drive. There was very little traffic on the road. The only real hazard is the lack of road markings – it can be hard to see where the edges of the road are and the central line, as all the white markings are so faded as to be almost invisible. Sometimes there are dogs, donkeys, goats and sheep walking in the road.

Car hire on the Albanian Riviera

Albanians drive on the right, and one of the road rules is that you have to always drive with your lights on – even in bright daylight. It was my first time ever driving on the right, but I didn’t encounter any problems driving in Albania.

We used Sixt car hire, which is based in the Sunny Holidays office near the port in Saranda. Most car hire companies in Albania have their main base in the capital Tirana, and they sometimes charge for transferring the car from Tirana to the Saranda office for you to collect there. Sixt don’t charge for this service. One thing to bear in mind with Sixt in Saranda is that the car we collected was quite different to the one we had booked online – they all seemed available in theory but in reality we were given whichever car was available at the time!

Visiting the Albanian Riviera by bus

Public buses ply the coastal road and the main towns are fairly well connected. It’s possible to reach Himarë by bus from Saranda, but it’s not clear when the buses run or where from. It is much harder to reach the smaller beaches such as Gjipe and Jala by bus – but these are some of the highlights of this coast. I usually opt for public transport when travelling, but in Albania I chose to hire a car because of the difficulties of public transport. Hitchhiking is common among both locals and travellers in Albania.

Where to stay on the Albanian Riviera?

I had an amazing time at Ionian View in Himara. The owner Aris is absolutely brilliant and really cares about his guests. He made our stay very relaxed, and the free breakfast is wonderful – a Greek feast. Aris also gave us useful local tips about where to eat in town and how to get to the best beaches nearby. Our room was lovely and had a huge terrace to the side, where we had two deckchairs overlooking the sea. The beach is very close – you just walk down a lot of steps. Himara makes for a nice base on the Albanian Riviera as it’s got both its own beaches and plenty of restaurants, and is close to beautiful sights like Porto Palermo and Gjipe which are about a 10 minute drive away. Ionian View is €45 per night.

Saranda has plenty of accommodation and is easy to get to as it’s connected to Greece by ferry, and to the rest of Albania by bus routes. Saranda also has good facilities like car hire, which you can’t find in the smaller towns. However Saranda is pretty busy, and if you enjoy getting off the beaten track, travelling further north or south along the coast will reward you with nicer, quieter and cheaper places to stay.

We stayed at Vila Viktori, a low-key, family-run guesthouse near the lagoon in Ksamil. The family were kind and friendly, always smiling, and although they don’t speak much English this wasn’t a problem. Vila Viktori is in a quiet, rural area with dirt roads, and has views out over the sea lagoon. The rooms have balconies above a garden, where there are huge grapevines, and lime, orange and olive trees. The location isn’t great if you want to be close to the beaches in Ksamil, although if you have your own transport and like quiet, out-of-the-way places it’s a good choice. We watched a fantastic sunset fill the sky over the lagoon and the sea from the balcony. Vila Viktori is €25 per night.