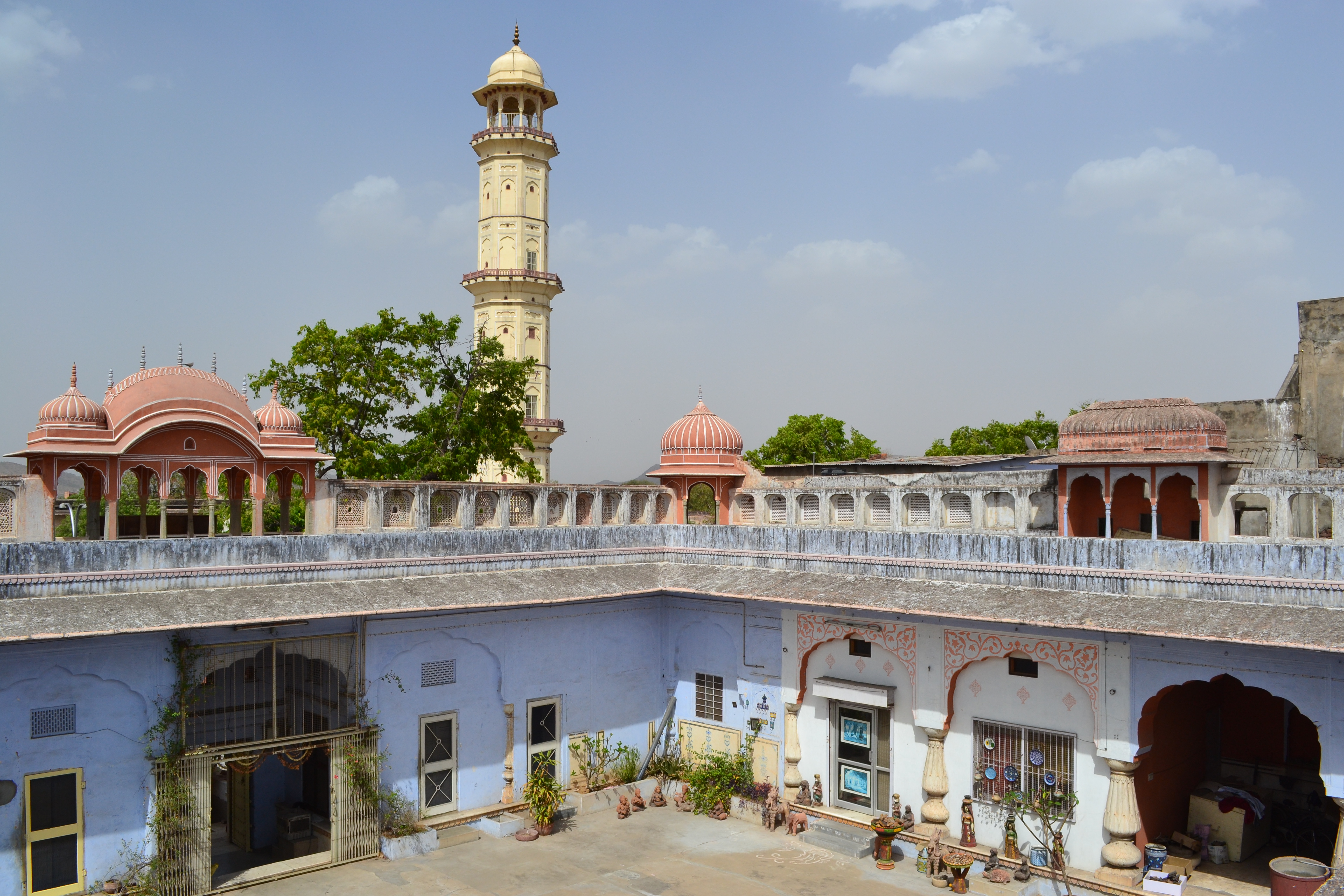 My brother and his girlfriend came out to visit me during my stay in India, and for the past two weeks we have been travelling within India.  Our first stop was in Jaipur, Rajasthan.

We arrived in the evening, having flown from Mumbai.  It was 35˚C in Jaipur after 7pm when we landed.  From the plane I had seen the bright crescent moon and a single star hanging over the city of Jaipur.

We stayed at the Hotel Pearl Palace:

The next morning we ventured out towards the Pink City.  We set off on foot but were accosted when trying to walk almost anywhere, by the touts that are rife in Jaipur.  There was a continual stream of rickshaws pulling up beside us and insisting we get in, for very inflated prices.  Even while trying to cross a road, rickshaw walas would get out on foot, and be offering their services for taking us across a road, giving us guided city tours, etc.  It was difficult just to walk down the street because the harassment was so constant.  It was very hot as well.  I was okay but Richard and Sabrina had only been in India for three days, and were acclimatised to the European winter.

After a couple of stops for drinks, we entered the Pink City.

It is a walled town within the city of Jaipur, ringed around by a high pink wall and the majority of the architecture inside is coloured the same pink.

We found this courtyard temple down a winding lane off the Tripolia Bazaar.

We were wandering the streets of the Pink City and met a man among the little shops in the alcoves of the main street (Tripolia Bazaar).  He recommended we visit the Krishna Temple opposite, and said it gave the highest viewpoint in the city.  We were already beleaguered with unsolicited ‘advice’, but this man was not a tout, and did not try to get us into his shop.  We followed his advice and crossed the road to enter the Krishna Temple.  Unfortunately once we got inside we were dogged by a persistent man trying to get us to buy his products, but it was a very nice temple, comprised of sun-filled courtyards in pastel colours, and stairways to the rooftop.

From the upper terrace we could see the sand-coloured hills surrounding Jaipur, and the streets below.  We could see the City Palace from afar (though it would take us some time to find it later when seeking it among the maze of little streets within the Pink City), and the white tower of the Iswari Minar opposite the temple.

After some further wandering in the labyrinthine backstreets, we made our way to the City Palace.

A passage off the central courtyard leads to an inner courtyard, topped by this edifice:

This courtyard has four colourful and intricately decorated doors in the side walls.

The fourth door (above) is decorated with peacocks, and was my favourite of the doors.  This was a common preference as it was the most popular door, with people frequently crowded around it.

The green door however I recognised at once, as it is the cover to The Rough Guide to India!

I was able to recreate the cover shot.  I had not noticed until then how Jaipur-centric the Rough Guide to India is – with pictures of the Jaipur City Palace on the front and spine, and a map of Jaipur city on the back.

The next day we ended up in Ram Niwas Gardens, south of the Pink City.  We had intended to go to Ranthambore NP, but it proved impracticable once we got to the main bus stand, asked a few travel agencies and assessed the practicalities.

We toured the Central Museum, which is located in Albert Hall in Ram Niwas Gardens.  The museum had varied exhibits, from Hindu and Buddhist sculptures to mummies, musical instruments and medieval literature, but my favourite part was the internal architecture, of white marbled courtyards and Mughal arches that appeared out of nowhere whenever one turned a corner in the museum.

We then went to the zoo, as some kind of recompense for missing the National Park.  It appears that not many tourists visit Jaipur zoo, since we became the main attraction on entering.  Visiting Jaipur on the whole was not particularly easy, but at the zoo the attention we were getting became most obvious.  Whole groups of people were standing around an animal enclosure, with not one of them looking at the animal, but all of them staring at us.  It was uncomfortable, and we soon moved on to the less populated areas, and kept moving.

Most of the big cats are not treated well at Jaipur zoo.  This leopard was in a small cage with no space to move around much or to get away from the gaze of visitors.  It had a small external pen, but was lying inside out of the sun.  The zoo’s black panther was also ill at ease in a small outdoor enclosure that did not allow it any privacy, which is the nature of leopards and panthers.  In the wild they are solitary, and difficult to spot.

This white tiger was worst off of all.  It was pacing up and down its yard, being tormented by people agitating it from beyond the safety of the cage bars.  Richard said of the tiger’s tormentors: ‘I doubt they would be so confident if the cage bars weren’t there.’

The tiger was unafraid of any of the taunts.  But it was emaciated and completely lacking in any stimulation – it was just spending its time pacing the small pen.  White tigers are highly endangered, and it is a travesty that such a rare, beautiful and intelligent animal is being treated so poorly, with self-starvation its only method of resistance.

The lion we saw however appeared content, and the other tiger inexplicably had a much larger enclosure, and looked to be in much better physical condition and less frustrated than the white tiger.

Obviously space is an issue at any city zoo, but the problem at Jaipur seems extreme, with more space being given to animals that arguably need it less, such as peacocks, than some of the big cats.  Little consideration is given to the differing natures and habitats of each species, for example between tigers and leopards.

We caught a rickshaw back to the hotel and ate dinner once more in the lovely rooftop restaurant.  It has fairy lights decorating the two-tiered rooftop, a wonderful panoramic view over the city, and some of the tables are wrought in the shape of different animals.  The food there is delicious, as are the milkshakes, and cold aerated water is pumped out of little tubes hidden in the restaurant canopy, covering everything with a thin, cooling veil of mist.

On the third day I had a delicious breakfast of chapatti, potatoes and gravy, with vanilla shake, and we set off for the central bus stand to catch a bus to Agra.