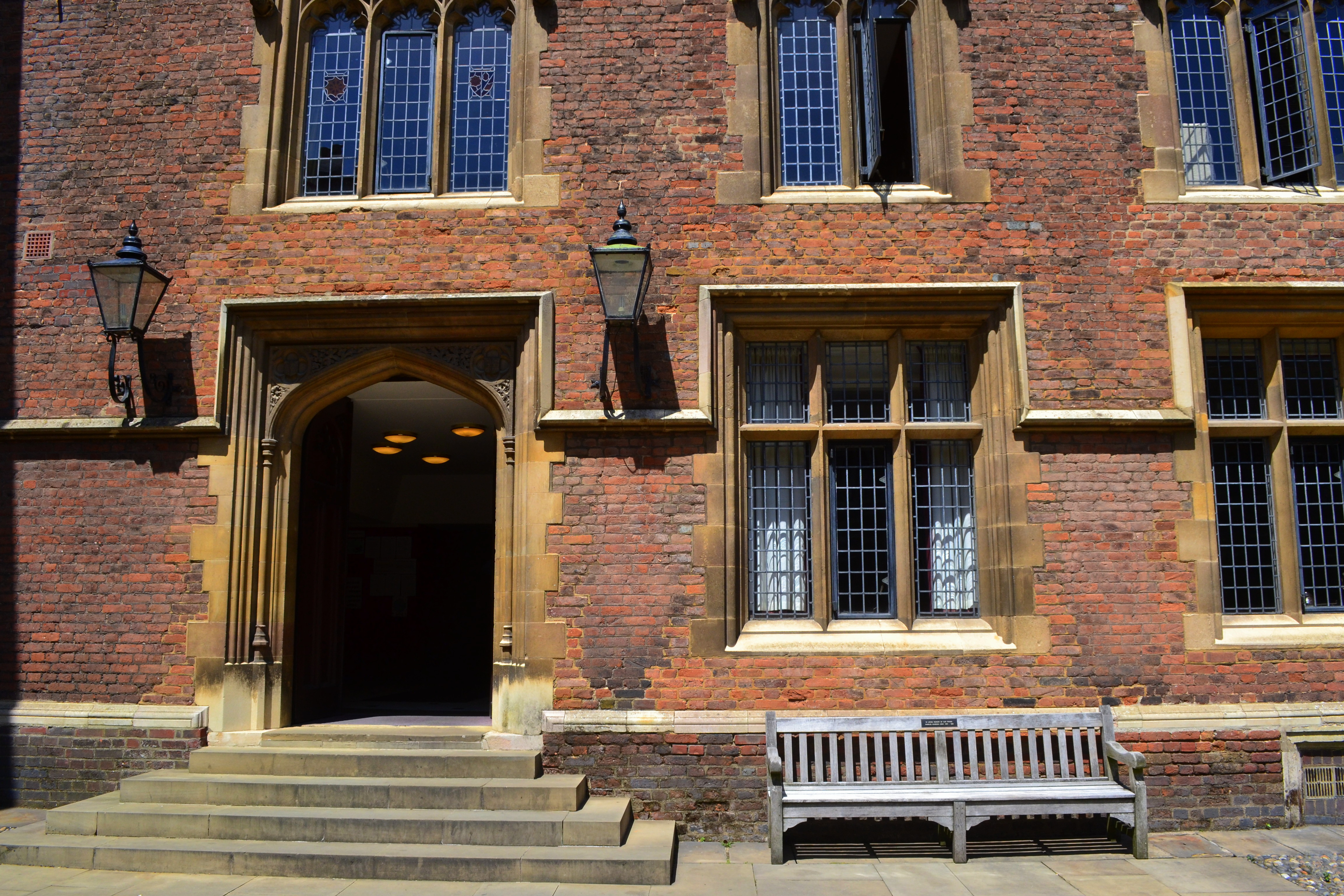 I was lucky enough to pass St Catharine’s College on an open day in June. It happened to be a beautiful day as well.

Many Cambridge colleges were open on this day to invite prospective students and the public in to look around, including nearby Peterhouse, Pembroke and Corpus. I knew I had to take up this opportunity to visit St Catharine’s, since it is a college generally closed to visitors.

A large and imposing open courtyard on Trumpington Street in Cambridge, St Catharine’s dates from 1473. Its city centre site manages to be both grand and very compact, comprising just the main courtyard, a second courtyard and the Master’s Lodge.

St Catharine’s College neighbours other colleges on three sides, and is positioned backing onto Queen’s, beside King’s, and opposite Corpus Christi.

St Catharine’s College is unique in being the only college founded by the serving master of another college. Robert Woodlark, Provost of King’s College, spent twenty years buying up tenement houses in Queen’s Lane, preparing to establish another college.

By 1473 he had amassed enough land to found a community called St Catharine’s Hall.

At this point the college was a very small community. In August 1475, two years’ after its modest beginnings, St Catharine’s was enlarged with the addition of the main dining Hall. A charter was drawn up and signed by the King, establishing St Catharine’s as a lasting college with provision for a Master and three or more Fellows.

St Catharine’s close ties with King’s College became prominent again in 1880, when a merger was proposed between the two colleges. King’s was looking to expand and acquire more space for its city centre site, and St Catharine’s sought a more stable financial situation. Merging seemed like the perfect solution, but St Cat’s would have lost its identity and independence.

There are several saints named Catharine, but the college is named for Saint Catharine of Alexandria. Catharine was an Egyptian Christian martyr who lived in the 3rd century AD, a woman condemned to death by a spiked wheel. Her story persists culturally in the name of the firework, the ‘Catharine wheel’. The college shield still bears the Catharine wheel today, and her symbol is the college’s emblem.

The college was founded on St Catharine’s Day, November 25th, 1473. In the late medieval and Renaissance periods there was something of a cult around Saint Catharine, and she was also a patron saint of learning.

The college chapel has a pink Georgian ceiling, and a gleaming, black and white tile floor.

A little mouse is carved into the wooden stand of the lectern in the chapel – a very nice touch!

The College had no undergraduates until the 16th century, with the Founder Woodlark’s concern being primarily the provision for Fellows. By the 17th century St Catharine’s was still one of the smallest colleges in Cambridge. Some very able Masters then led the college to grow both in funds and ambition, strengthening the undergraduate community and enriching the college.

The College was bequeathed a public house in 1626, the income from which was used to found scholarships and complete the college chapel.

Since the college’s primary site in central Cambridge is small, St Catharine’s has additional student residences located at a second site further out: St Chad’s, which lies off Grange Road and is not far from the University Library.

Famous alumni of St Catharine’s, Cambridge, include Jeremy Paxman, actor Sir Ian McKellen, and actor-comedian Ben Miller, who all attended the college as undergraduates. St Catharine’s was also the alma mater of John Addenbrooke, founder of Addenbrooke’s Hospital in Cambridge, one of the largest teaching hospitals in the UK.