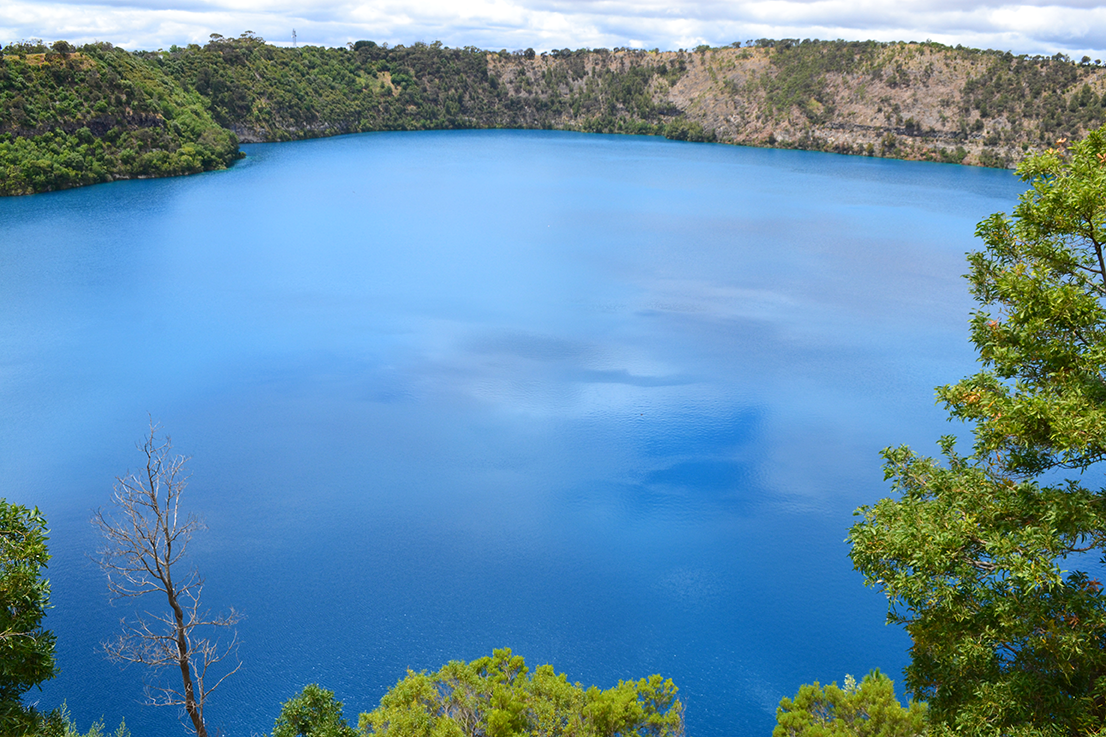 The small town of Mount Gambier is unknown and rarely features on tourist itineraries to Australia. But this small town in the state of South Australia has stunning and unique natural features. Mount Gambier is home to volcanic crater lakes, and impressive sinkholes that have been transformed into beautiful gardens.
Mount Gambier is unlike anywhere else I’ve been. It’s surrounded by the craters of ancient volcanoes, which have formed tranquil and beautiful lakes. Blue Lake is a deep, intense blue in summer, even on the cloudiest day.

Between December and March the lake is a striking bright blue. For the rest of the year April to November it is an unremarkable grey colour. We visited Blue Lake on New year’s day, and got to see its intense cobalt blue colour as we walked around the volcanic rim.
The vivid cobalt blue of the lake is thought to be caused by growth of crystals on the lake’s surface during the warmer temperatures in summer. The crystals cause light to be reflected differently, giving Blue Lake its colour and its name.
Blue Lake is the drinking water supply for the town of Mount Gambier.
You can walk around the full circumference of Blue Lake’s crater, or just partially around. There’s also Valley Lake close by, which you can walk to, but it’s not as impressive as Blue Lake.

How to get to Blue Lake

To get to Blue Lake, you can cycle, or walk; it’s a 40 minute walk from the town centre (near Cave Gardens) to Blue Lake. By car the lake is only a few minutes drive away.

Just as fascinating as the crater lakes are the sinkholes around the town. Mount Gambier was founded because of the town’s central sinkhole, which provided a source of water. Nowadays the original sinkhole is a garden, which you can walk down into and explore.

The Cave Gardens are located in Mount Gambier’s central sinkhole, and are right in the centre of town.

Further out of town is Umpherston Sinkhole, a much larger and even more impressive sinkhole. This sinkhole has also been transformed into a garden. Hanging plants grow from the ground level over the edge. The trailing plants form a green canopy around the earthen walls of the sinkhole, creating a veil that hides the caverns behind. Possums live in these caverns at the back of the sinkhole – and you can even spot them in daylight, under the cover of the undergrowth.

How to get to Umpherston sinkhole

Umpherston Sinkhole is another 40 minute walk from the central Cave Gardens. The most convenient way to get around Mount Gambier is of course by car, but we were on a tight budget and it is totally doable on foot.

How to get to Mount Gambier

Mount Gambier is connected by bus to cities north and south along the coast, and it’s straightforward to approach from either Adelaide or Melbourne. The Premier Stateliner bus serves South Australia, connecting Mount Gambier to Adelaide. On the Victoria side, the V/Line bus from Warrnambool runs to and from Mount Gambier. Warrnambool connects onwards by train and bus to Melbourne – with the bus taking the scenic route via the Great Ocean Road. Buses are comfortable, and journey times to Mount Gambier are around 6-7 hours from Adelaide and 3.5 hours from Warrnambool.

Why did we decide to visit Mount Gambier?

My girlfriend Mel and I did some house sitting in Australia, and the lovely couple whose cats we looked after were going away to Mount Gambier for Christmas. They told us about the town and recommended it, and the more we looked into it, the more impressed and excited we became.
Mount Gambier exceeded our expectations. We found it an amazing place, even though nobody goes there. Out of all the many people I know who’ve travelled to Australia, I’ve never heard of anybody visiting Mount Gambier. I love out of the way places that you can discover and explore for yourself.

Where to stay in Mount Gambier

There’s not a large amount of accommodation in the town of Mount Gambier. We stayed at the Grand Central Motel, a budget hotel which is $100AUS per night for a double/twin. It is basic but super central – it’s less than 5 minutes walk to the Cave Gardens from here. In fact we walked to everywhere in town from here: from Blue Lake to Umpherston sinkhole, which are in opposite directions. The owner is friendly and helpful, and we found it a handy and affordable base for a couple of nights.

The last word on Mount Gambier

Umpherston sinkhole in Mount Gambier has been discovered by some tour groups and is on a few coach tour itineraries. However there’s not too many and it doesn’t feel crowded – or only in contrast to the beautifully deserted Western Australia. Hardly any travellers or tourists stay overnight in Mount Gambier, so if you do you’ll beat those for whom Umpherston is just one stop on a packed itinerary. At Blue Lake and the Cave Gardens, Mount Gambier’s other major sites, we encountered only a handful of visitors. If you’re in South Australia and are interested in sinkholes or crater lakes, or just interesting different places that don’t fit the stereotype of what to expect in Australia, try Mount Gambier. My advice is go now before it gets in the guide books and everyone finds out how amazing Blue Lake and Umpherston sinkhole are!