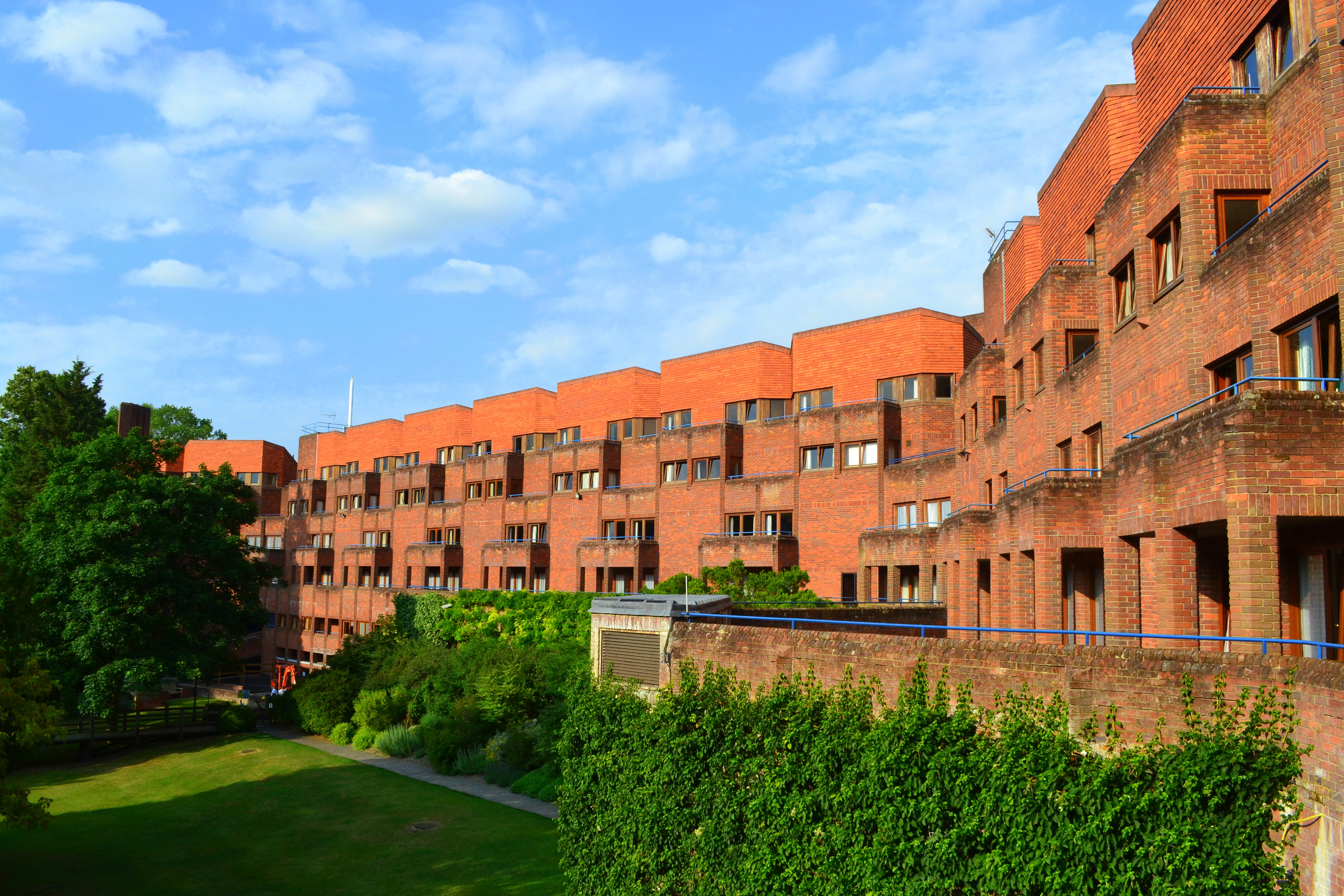 Robinson College is the youngest college in Cambridge. It was founded in 1979.

Robinson College was created after a £17 million gift was made to the University of Cambridge by Sir David Robinson, a British entrepreneur and philanthropist, for the purpose of founding a new college in Cambridge.

Constructed entirely of distinctive red brick, Robinson College can appear quite unappealing at first, particularly if thinking of it as a ‘Cambridge college’ and comparing it with ancient picturesque rival colleges in mind. This was my first impression. However, Robinson won me over.

Once I got to the back of the great red-brick building, with its design of three storeys with long balconies looking out over sweeping, lush, landscaped gardens complete with a stream and bridges, I had stopped comparing it to anything else. The key is to take Robinson College on its own merits, and look on it as something new and different, to judge Robinson College not against other colleges but see what it offers in itself.

Robinson College is open to the public most days, between 9 and 5. I arrived later than this time, and it was not a problem; indeed the college comes across as being a particularly laid back and open environment. There are no rules against walking on any grass, for example.

I wandered, exploring, through corridors to the long balconies, across the garden and boardwalk over the stream to the college’s Victorian houses and modern amphitheatre.

I love the chapel window, full of colour and reflecting the sky.

I went inside the chapel, which was open, but totally dark. Since I didn’t know where the light switches were I could only fumble my way out again.

Interestingly I’ve heard from a colleges access officer, whose work involves promoting widening participation at the University of Cambridge and encouraging students from different backgrounds to apply, that some applicants much prefer Robinson to the older medieval colleges. Robinson can seem less imposing as a ‘Cambridge’ college and perhaps more accessible.

Although away from the tourist route through central Cambridge, Robinson has a prime location where students are concerned, being directly behind Cambridge University Library, one of Britain’s five copyright libraries.

Robinson is one of the colleges on Grange Road, along with Clare Hall (its nearest neighbour, just across a side road) and Selwyn College. This part of Cambridge is full of secondary residential sites for old city centre colleges, as well as university departments and college playing fields.

Although a bit out of the way, Robinson is welcoming to visitors and provides a good opportunity to see a modern Cambridge college. The gardens are definitely worth a visit, and the college’s architecture is unique.

To get there take Senate House Passage and then Garret Hostel Lane (the narrow medieval lane between Trinity Hall and Trinity College). Keep walking straight all the way – across the river, the road, past the University Library, across another road and you’re at Robinson.