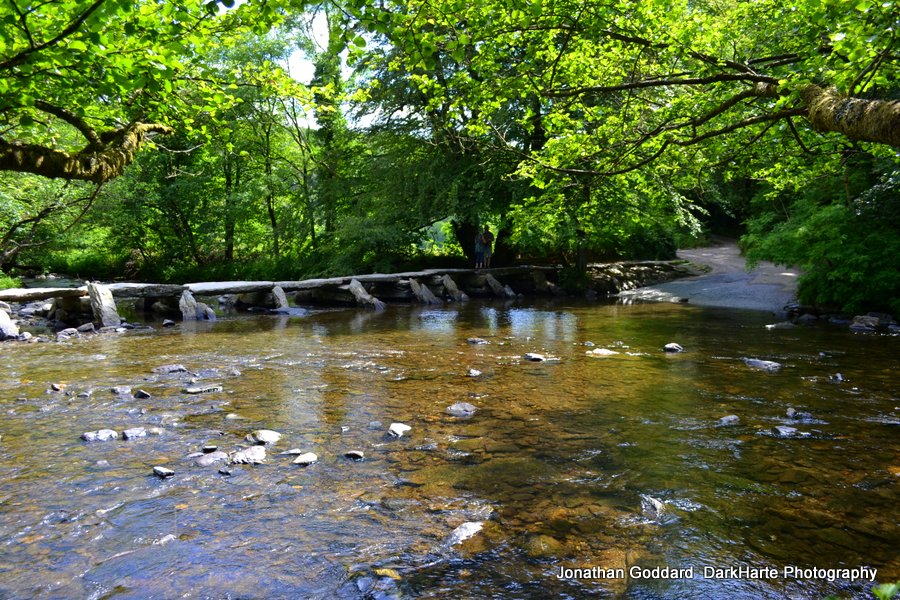 Tarr Steps is an ancient packhorse bridge in Exmoor.  Made of huge slabs of stone, no-one really knows how old it is, or how it was built, but estimates date back to 1000 BC. The National Park of Exmoor is full of rivers, forest and wildflowers, and spreads across Devon and Somerset. Wild ponies roam the moor, known as Exmoor ponies. Exmoor’s topography includes high moor, rolling farmland, forest and river valleys, running from the interior to the coast.

This view shows the wooded dell in the valley, and the smooth green hills surrounding it.  This is the valley of the River Barle, one of the tributaries of the River Ex, the major river running through Exmoor.  The Ex runs throughout Devon, from its source in the moors of the north to the sea in the south.

We walked down into the valley of the River Barle, past this pretty lodge and cafe.

In December 2012 the great stones that form the bridge Tarr Steps were mostly washed away in flood water. It was rebuilt in February 2013.

The bridge at Tarr Steps lies beside a paved ford in the river. Here the water forms shallow pools and children and dogs splash around playing and bathing. Sunlight sparkles on the river’s surface, and the water is so clear and clean that it is completely transparent. It is cold, pure water from the moor.

We walk along the valley, through pathways strewn with boulders and sunshine, among the dappled groves of trees. Tree trunks loom out of the bright green gloom of the forest, deeply covered with moss, surrounded by sprouting fresh green ferns.

The path winds along a high route up the valley. The trees clear and there are fields of pink foxgloves. I can see above the canopy of high trees; below me the bowl of the forested valley sweeps around the curve of the river. The path we follow is formed from the grey rock of the hills. Far beneath us the river winds through the tree cover.

The footpath drops down the steep side of the valley to meet the river again.

We stood in the patches of sunlight shining through trees, where the clear cold water flows over brown and green rocks in the river bed.

We cross a bridge and notice silver-grey fish darting in the river. This is a well-known salmon river, where the salmon come to spawn. These fish are long like arrows, and exactly the same crystalline, silver-grey colour of the river itself, perfectly camouflaged. You can see them only when they move.

Reflections of clouds and a ripple in the stream.  Below: a female damselfly landed on a leaf beside the River Barle.

This log was covered in coins, which had been forced into slits in the wood.

We follow the footpath beside the river back to the Tarr Steps.

We walk up the valley into the folds of the hill, until we are surrounded by open blue sky, and have left the canopy and the clouds over the river valley behind.

Then we drive over Exmoor, across almost the whole moor. There are splendid views down to the sea, and back across the undulating farmland and moor.