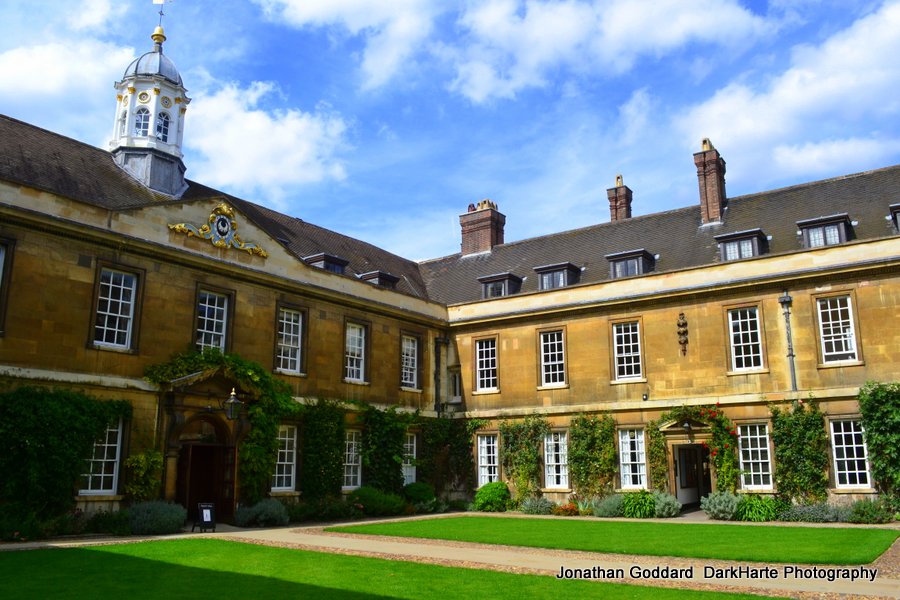 Trinity Hall main entrance from the outside, in Trinity Lane.

Founded in 1350 by the Bishop of Norwich, William Bateman, Trinity Hall was initially established to teach canon and civil law.  Canon (Church) lawyers were needed for many roles in fourteenth century England, which was rigidly divided between the church and the state.  The first outbreak of plague, or ‘the Black Death’, in the country in 1349 also created a shortage of trained Canon lawyers, because so many people had died.

Today Trinity Hall retains its strong connection with the study of law, but it is a diverse college where students can study all of the subjects offered by the University.  Natural sciences are now the most popular undergraduate subjects at Trinity Hall, with strong numbers taking law, Mathematics, history, arts, languages and engineering.  It is the fifth oldest college in the University of Cambridge, and one of the very few to retain its original name and identity since medieval times.

Going through the south-facing archway of the Front Court leads into Avery Court.

View of the college chapel from Avery Court.  Avery Court is home to the Trinity Hall boat club.

The environment in Cambridge colleges is a mixture of pastoral and academic, providing a home for residential, social and studying activities.  The college contains teaching rooms for seminars, supervisions and lectures, examination rooms, administrative offices (for registration, student records etc), accommodation (for students, fellows, and the master of the college, who lives in a separate lodge), a chapel, library, dining hall and cafe, as well as other function rooms like students’ and academics’ common rooms for relaxation, and conference rooms.

The college is a complete, self-contained community and manages its own affairs, separate from the University.  All colleges in the University of Cambridge have individual, different identities, atmospheres and communities of people.  They are self-sustaining bodies that manage their own autonomous affairs, each college influenced by its own unique history, traditions and ethos.

Roses over a doorway in the Front Court of Trinity Hall.

The Old Library is one of the oldest parts of Trinity Hall.  Bishop Bateman’s original library chamber housed the important books of canon law, which were fastened with iron chains in order that they might be kept in place and available to all students and fellows wishing to use them.  The old Tudor library, built circa 1590, took over from the original chamber, and is the beautiful building seen today.  It still contains its chained books, which are now very rare and old.  It is the oldest library in Cambridge still in its original setting, and is a unique and special old library.

The Old Library possesses this wonderful old door, which floats in the middle of the two storey library building.  Its dark antique wood is set among red Tudor bricks and wreathed by the creeper.  The Master’s Lodge is opposite the Old Library, and in the medieval period the little door used to be connected to the Master’s Lodge by a wooden walkway, so that the Master of the college could walk directly to the library.

I was lucky enough to get to visit the Old Library on a tour.  Inside is a rarefied atmosphere with a musty scent of old books.  The dark wooden floor is warped and has bumps and dips in it because it is so old.  The chained books date mostly from the 1590s, and the building is a late medieval chained library.  It still has the original shelves and wooden seats inside, and its interior is unchanged since the library was built in the late medieval period.  It is all excellently preserved and it is hard to believe the surroundings are so old.  The oldest book in the library dates from around 1066, and the library also holds many college charters that give insights into its long history, and beautifully illustrated illuminated manuscripts.

The Old Library is in its original state and has no electricity, including no light fittings.  At the time of its construction, the library shelving and seating were laid out in such a way as to provide the optimal light conditions.  It remains sufficiently light in the library due to this clever arrangement made in the medieval period.  The library was housed on the top floor of the building so that when the river flooded (Trinity Hall sits beside the River Cam), the valuable books would not be damaged.

In front of the Old Library is a beautiful flower bed, full of a colourful abundance of flowers in late August.

The west-facing end of the Old Library building displays the college shield of Trinity Hall.

The college’s new library building, the Jerwood Library, stands beside Latham Lawn and is positioned on the riverside.

View of the River Cam from Trinity Hall, looking towards Clare Bridge and the Fellow’s Garden of Clare College.

The buildings on Latham Lawn.

This old wall stands between Latham Lawn and the Fellow’s Garden at Trinity Hall.

The Jerwood Library was built in a small space beside the riverfront, and makes the best use of space.  It is compact inside, with three floors of library and a garret room at the top, and the front of the library points out over the river.

Here you can see Clare College and, behind, the tell-tale turrets of King’s College Chapel.

Trinity Hall at the water’s edge.  Here is the Jerwood Library, and the college’s two punts in the foreground.

View from the public bridge beside Trinity Hall, looking towards Trinity College.

The Jerwood Library and the public bridge.

The weeping willow in the gardens of Clare College drapes its branches in the River Cam.