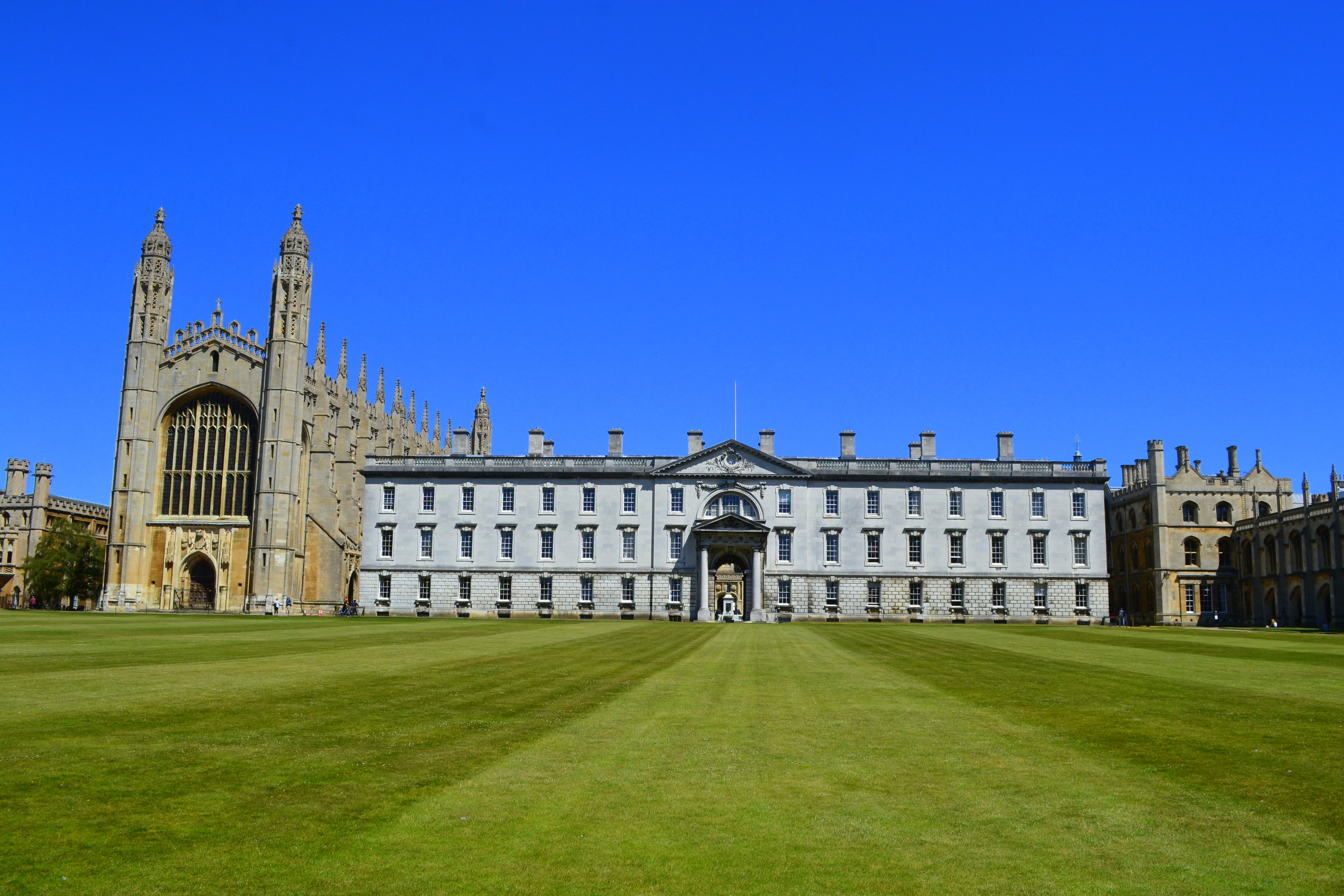 King’s College is one of Cambridge’s most famous colleges, and its chapel has come to represent the city as a whole, as the emblem of the city council and perhaps Cambridge’s most iconic and recognisable landmark.

Viewing the city from the castle mound, King’s chapel dominates the Cambridge skyline.

The view towards the city centre from the castle mound. On the left is St John’s College Chapel, and King’s College Chapel is centre right, its roof horizontal along the skyline.

King’s College is also the most popular college among undergraduate applicants, receiving more applications for 2015/16 entry than any other Cambridge college.

King’s College chapel is immense, having more in common with cathedrals than with other college chapels.

The chapel was built in stages, starting in 1446 and being completed in 1515. It was the work of generations of master stonemasons, architects and other craftsmen, and the project of no less than three different English kings: Henry VI, Henry VII, and Henry VIII.

The chapel has a famous choir who perform in televised choral services every Christmas and Easter, and the ceiling is the largest span of fan vaulting in the world.

King’s College has produced some very famous alumni. Among them are E. M. Forster (author of A Passage to India) and Alan Turing, father of the computer and creator of the code-breaking Enigma machine. Other former King’s students include the war poet Rupert Brooke, and modern novelists Salman Rushdie and Zadie Smith.

Britain’s first Prime Minister, Robert Walpole, was also a student at King’s College. E. M. Forster had a lifelong connection with King’s and Cambridge, becoming an Honorary Fellow of the college.

Perhaps the most significant King’s alumnus in terms of his contribution to the world and to modern society is Alan Turing, who also has a compelling life story. He invented the first computer, a Turing machine, before 1946, and computers are still based on his founding principles today. Turing was instrumental in cracking the Nazi coding system that encrypted military messages. Once his team broke the Enigma code, Allied forces were able to decipher Nazi messages and knew in advance what the enemy was planning. This turned the tide of the Second World War and gave the Allies the advantage.

Tragically, despite being an individual who arguably shortened the war and saved millions of lives through his work, Turing’s achievements were not recognised by the establishment, and instead Alan Turing was persecuted for his sexual orientation. After trying to report a burglary to his house, the police instead became interested in Turing’s own personal life, and he was convicted of homosexuality in 1952. As a punishment he was forced to take oestrogen and endure ‘chemical castration’. He was never the same again and ended his life by committing suicide aged 41.

There is a blue plaque commemorating Turing on one of King’s College’s buildings along King’s Parade. The film The Imitation Game is based on Alan Turing’s work and life.

King’s College was built on land that was already inhabited with medieval houses and shops. The area between King’s Parade and the river was prime land in the bustling heart of medieval Cambridge. These old buildings may have looked like those that still stand on one side of King’s Parade today. These houses were knocked down by order of the king who wanted the site for his new college. Another victim of this cull in seeking land for King’s College was the original community of Christ’s College, Godshouse, whose college was founded on land where King’s College now exists.

The College Ethos and Reputation

King’s has built a reputation as a college where diversity is valued. Despite its original heritage as the sister institution to the elite public school Eton College (and their chapels’ similar architecture), King’s College now champions state school applicants over independent school applicants, taking the large majority of its undergraduates from free rather than fee-paying schools. Its ethos is to celebrate and encourage difference, across social class, politics, sexual orientation, ethnicity and nationality, promoting a diverse academic body and a tolerant and accepting college culture.

Despite this admirable policy, King’s still has some way to go in terms of improving access. Most Cambridge colleges allow local residents to enter their sites for free. However King’s is one of the only colleges not to do this, insisting on the relatively high admission price or turning people away, including Cambridge residents and University staff (those who don’t have ID cards). For this reason it seems ill-fitting that King’s should be the establishment that most represents Cambridge, since it prevents most of Cambridge’s population from viewing the iconic college and chapel.

It would be great to see a change in the college’s policy to visitors that is more in line with its stance on student admissions; for example, there could be a reduced or waived fee for visitors on a low income, NHS workers etc. Other colleges that charge for admission such as King’s College’s neighbours Clare, Queen’s and Trinity, seem to strike a balance between the lucrative tourist charges and public and local accessibility. For example users of the Cambridge public library can access Queen’s College for free with their library card.

The cloisters at King’s College, looking out onto the street at King’s Parade.

The college’s entrance gate onto King’s Parade is distinctive. Here you can see the statue and lawn of Front Court.