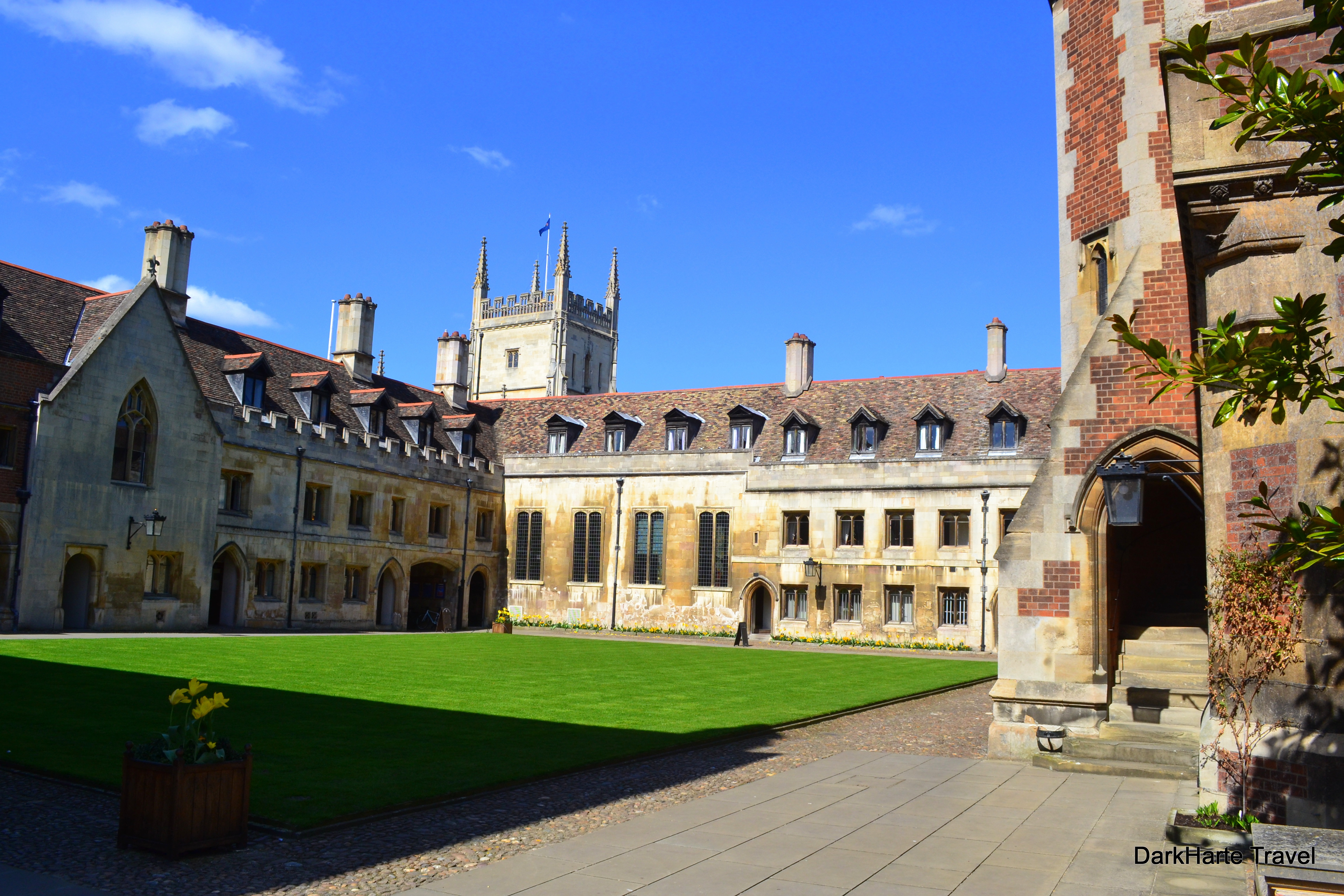 A remarkably friendly and open college, Pembroke is also beautiful, and very old. The delights of wandering its grounds – noticing another Gothic archway, a cat-flap cut into a modern door in a medieval building, or simply enjoying the gardens – do not diminish no matter how often you visit.

This college lies directly on the route into town from my house, and since it is reliably open, free and welcoming we often bring visitors here. Each time we visit I love it just as much as our visitors do.

Dating from 1347, Pembroke is the third oldest college in Cambridge, preceded only by Peterhouse and Clare. Famous alumni include Britain’s youngest ever prime minister, William Pitt the Younger; the poet Ted Hughes; actor and comedian Eric Idle (member of Monty Python); and Edmund Spenser, author of The Faerie Queene. In fact Pembroke has been the college of numerous novelists, poets, politicians and scientists.

William Pitt came up to Cambridge at the age of fourteen, and his studies included classics, politics and trigonometry . In Cambridge he met and befriended William Wilberforce, who became a lifelong political ally. Pitt became Prime Minister in 1783 at the age of 24, heading a government that lasted for seventeen years until 1801. He then became prime minister for a second time between 1804 and 1806. Pitt was termed ‘the Younger’ to distinguish him from his father of the same name, who had also been prime minister. He was a strong politician, opposed to continuing the American War of Independence, and for political reform in Britain, where rotten boroughs undermined the electoral system. He presided over the acts of Union between Britain and Ireland in 1800, which turned ‘Great Britain’ into ‘the United Kingdom’, and was praised for his leadership during this period of profound national change. There is a statue of Pitt at his old college, outside the library.

Despite being one of the oldest colleges, it has not always had the same name. The college was originally called the Hall of Valence Marie, then Pembroke Hall, and eventually in 1856 took on the name it bears today, Pembroke College.

The grounds surrounding the college buildings are full of tempting archways and little alleyways leading off into new courtyards and secret gardens, often hung with old-fashioned lanterns and covered with creeper.

The gardens at Pembroke are really nice to visit throughout spring and summer, with lots of flowers, foliage and interesting trees, and a few exotic plants.

Pathways connect several lawns and courtyards. From Old Court you can walk through to either Library Court on the right, or straight ahead onto Ivy Court. Towards the back of the college lie New Court and Foundress Court.

Unusually, Pembroke’s recreational rooms are called ‘parlours’ rather than ‘combination rooms’, which are common to other Cambridge colleges. Parlours or combination rooms are divided into three distinct communities: Junior (for undergraduates), Middle (for graduate students) and Senior (for Fellows).

Pembroke’s chapel was the first chapel to be built in Cambridge, and required the permission of the Pope. The original chapel still exists, having been converted to a library, and is now known as the Old Library. A new chapel was built for the college and consecrated in 1665. It was the first completed work of architect Sir Christopher Wren.

Pembroke has one of only two Wren chapels in Cambridge. The other is at Emmanuel College.

A cloister built adjacent to the Chapel contains a nice war memorial to the many members of Pembroke who lost their lives in the First and Second World Wars.