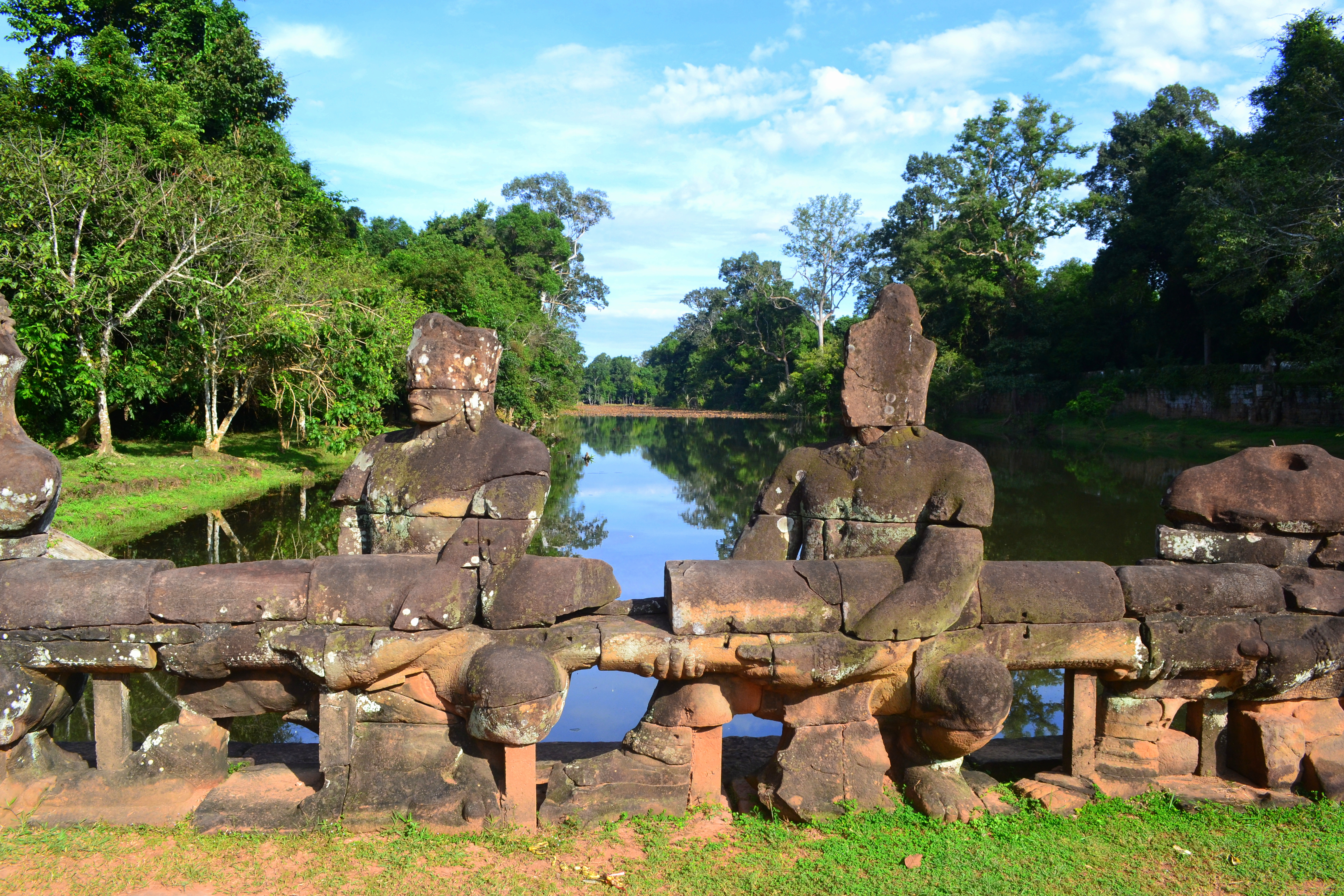 The ancient temples of Angkor are the remains of the Khmer civilisation, an empire that stretched from the heart of Cambodia, across Thailand to the edge of Myanmar, to southern Vietnam in the east and Laos in the north. The ancient Khmers built their capital at Angkor, which is the largest temple complex anywhere in the world. The landscape of this region is covered with hundreds of temples.

Angkor means ‘capital city’ in Khmer, the language of Cambodia. The citadels and temples at Angkor were built by successive kings, between 802 AD and 1350 AD. They are Hindu and Buddhist temples, reflecting the religions of the ancient kings, who were originally Hindu and then converted to Buddhism during the time of Angkor.

I had really been looking forward to visiting Angkor, to exploring this impressive historic landscape and the jungle-clad ruins of temples. When planning my trip to South East Asia, Angkor was the ultimate highlight in my mind. Despite such high expectations, Angkor and Siem Reap have exceeded them.

The temples are all so different, and unique. From the majestic stately temples that everyone knows about, to the understated ones left to be swallowed gradually by the jungle, there’s so much to discover and explore. The provincial town of Siem Reap is a wonderful place in itself, too. It feels sleepy and relaxed (although this may be just in comparison with other cities I’ve visited lately), yet there’s so much to do. The city has very many restaurants, cafes and bars to explore, endlessly fascinating markets, temples, a riverside promenade, and beyond Siem Reap there are a multitude of day trips possible to temples, floating villages, butterfly farms, museums and natural scenery.

We spent twelve days in Siem Reap, and I was sorry to leave when we caught a bus to Bangkok last Sunday. I was there long enough to have five days exploring temples, visit the great lake Tonle Sap and a village on stilts, watch tropical butterflies hatching from their pupae, make a Cambodian friend, watch exotic wildlife such as tortoises, monkeys, and a praying mantis, attend a charity concert for a local hospital, and have plenty of time to rest and recharge as well.

Here’s a quick introduction to some of the main temples. The temples are usually divided into groups according to the tour circuit they’re on: Short Tour (a small circuit of the major temples), Long Tour (a grand circuit of smaller temples), and the Roulous Group.

Angkor Wat is an impressive sight with its great moat and charismatic corn-cob towers. It’s top of the itinerary for many visitors to Angkor, and in fact it is so crowded that I think there must be a lot of people who only visit Angkor Wat.

It’s certainly impressive, but personally I didn’t enjoy it to the same degree as many of the smaller temples. It is highly commercialised, with vendors even inside the temple’s centre.

These are a couple of small temples just outside Angkor Thom.

A large pyramid-style temple, with a moat. It’s currently being restored by the Chinese government.

One of the highlights of the entire Angkor complex, perhaps the highlight; Ta Prohm is a ruined monastery that has been left to the jungle, and partially reclaimed by nature. Large tropical trees and vines grow beside and on top of ancient walls.

One of my favourites, Banteay Kdei is a labyrinthine monastery in a ‘flat’ layout, similar to Ta Prohm and Preah Khan. The temple is ruinous and falling apart, but exceedingly beautiful. I fear that in 30 years or so much of what I saw there may just be rubble on the ground, as parts of it are in very poor condition.

Banteay Kdei is not a famous temple, and is immeasurably quieter than its neighbour, Ta Prohm. This means that you can actually find peace and quiet here, among the moss-covered ruins, and watch tropical butterflies dancing in the sunlight coming down through the trees.

A small temple made of red brick, with intricate carvings.

The Long Tour / Grand Circuit – a tour of many smaller temples spread over a wide area.

A pyramidal temple and a major sight on the Long Tour.

An interesting temple off the road east of Angkor Wat, Banteay Samre has been partially restored.

Banteay Srei is the temple of women, made of rose-coloured sandstone with very fine carvings. This is an add-on temple that’s an extra drive away, but on the way you can stop off at a butterfly farm or the landmine museum.

A similar structure to Pre Rup, but East Mebon has many elephant statues.

The further you explore this small temple, the better it gets. At the far end there’s a beautiful tree-covered doorway. Unfortunately there are also vendors here, and the temple is commercialised, with clothes stands and art workshops, but it’s still pleasant. There’s a swampy area with vines and a couple of ruined courtyards, and some nice carving on the more intact stones nearer the entrance.

The best thing about Neak Pean is the boardwalk leading to the temple, which passes through an incredible flooded landscape.

I love this temple: a rambling ruin with a couple of huge trees standing astride old walls, slowly crushing them with the weight of their trunks.

East of Siem Reap lies another clutch of temples, the Roulous group, including Preah Ko, Lolei, and the impressive ancient citadel of Bakong.